England have been dealt another injury blow with fast bowler Mark Wood ruled out of the entire Ashes series.

England have been dealt another injury blow with fast bowler Mark Wood ruled out of the entire Ashes series.

The injury blow comes a day after seasoned campaigner James Anderson experienced tightness in his right calf after bowling just four overs on the first morning of the first Ashes Test against Australia at Edgbaston. He didn’t bowl again and was taken for scans.

He ended up aggravating the issue and as per Sky Sports, he’ll also undergo a knee surgery to get excess cartilage removed.

“Mark Wood has had left knee surgery to address an injury sustained during the ICC Cricket World Cup.He will continue rehabilitation for this and the left side strain that he sustained in the World Cup final,” an ECB statement said on Friday.

Apart from Wood and Anderson, Jofra Archer is also an injury worry who also played the world cup with a side strain. He was released from the first Test squad to play for Sussex where he’ll be eager to prove his fitness.

England had a happy problem of plenty as far as their fast bowling stocks were concerned ahead of the Ashes 2019. However, a day into the series, it has taken a dramatic turn.

The second Test starts from August 14. 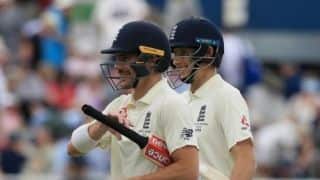