Marlon Samuels reached 5,000 One-Day International (ODI) runs on Tuesday against Australia in Match 8 of the Tri-Nation Series 2016. It took him 181 ODIs to reach this feat. He scored 125 and that also happened to be his first century against Australia. He has an average of over 34 in ODIs and a strike rate just over 75. He has 10 hundreds and 27 fifties under his name. Samuels was 57 runs away from this feat before the match. He is now the 10th highest scorer for West Indies in ODIs till date surpassing Phil Simmons. Samuels has been in good touch in the tournament. He scored 92 in the previous match against Australia. Like the previous match, he was sledged by the Australians again. Full Cricket Scorecard: West Indies vs Australia, Match 8, Tri-Nation Series 2016 at Barbados

This time around he was sledged by Australian wicketkeeper Mathew Wade in Adam Zampa’s over. Samuels struck three sixes off him before Wade ran him out with a spectacular throw. West Indies won that match easily by four wickets. Samuels shared a 192 run stand with teammate Dinesh Ramdin after West Indies were refused to 3 for 31 early on in the innings. Ramdin scored 91 from 92 balls. Their partnership was the reason West Indies managed a fighting total of 282 for 8 in 50 overs.

Samuels’ teammate Ramdin too reached 2,000 ODI runs. He is the first West Indies wicketkeeper to do so. Samuels has had a history of sledging against Australian players. He had an ugly spat with legendary bowler Shane Warne is Big Bash League. Warne passed a few comments in the T20 World Cup to which he replied with a match winning innings in the final against England. He was also involved in a fight with Ben Stokes. 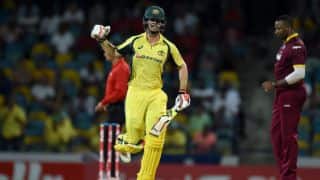