Marlon Samuels dedicates his century to the people of Jamaica

Marlon Samuels dedicates his century to the people of Jamaica

Marlon Samuels, who made a commanding 123 off 169 balls to keep the West Indies alive on the second day of the second Digicel Test on Friday, dedicated his century to the people of Jamaica. The island nation will celebrate its 50th anniversary of Independence on Monday, August 6. 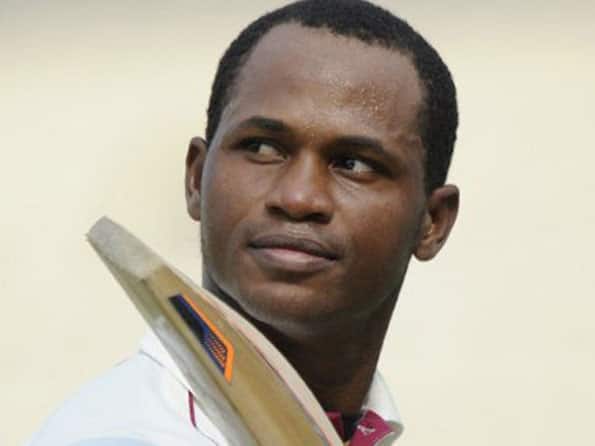 Marlon Samuels, who made a commanding 123 off 169 balls to keep the West Indies alive on the second day of the second Test on Friday, dedicated his century to the people of Jamaica. The island nation will celebrate its 50th anniversary of Independence on Monday, August 6.

The 31-year-old stroked 15 fours and four sixes – three in one over – including a gem over extra-cover to reach triple figures. It was his highest Test score, surpassing the 117 he made against England at Trent Bridge in May. The century was his first on home soil at Sabina Park and first in the Caribbean.

“This was for Jamaica. This was for the people of my country as we celebrate Jamaica 50. It is a special time for Jamaica so I came out and put in my piece to celebrate. It was good to be in front of my people doing well again,” Samuels said after the day’s play.

“I was 98 and I eased to my century with a six over cover and that made me quite happy. It’s one area where I score frequently so I backed myself to go in that direction once I got a ball to hit. I was batting with the last man and I got it in my area so I just hit through the line.

“It was not the easiest of pitches to bat on. The ball was doing something here and there and you had to be constantly watchful and patient. I had to really apply myself. There was inconsistent bounce, a few kept low, then you would get one that ‘shifted’ and one that would bounce.

“At Sabina Park early on it is never easy. You always have to look to build an innings. You can’t really go for shots too early as that could lead to a mistake and you could lose your wicket. This was the kind of wicket where you have to play late because of the bounce – that’s what I did today – play it late.”

The home side hit back in the final half-hour with two wickets from Narsingh Deonarine. The Black Caps will resume on 59-2 – an overall lead of 110 going into the third day on Saturday.

“We have to come tomorrow and if we are consistent on a pitch like that we could put New Zealand in some trouble. We have to be consistent with the ball and look to restrict them for as few runs as possible.

“A big total on that pitch out there is not going to be easy to get. It’s not a pitch to simply come out and play shots and dominate,” Samuels was quoted saying by the ICC official website.

Cricket returns to Lord's after completion of Olympics archery event