Samuels makes his comeback against in the upcoming T20Is against Ireland.

Middle order batsman Marlon Samuels says he is eagerly looking forward to his return to international cricket after injury forced him out of the New Zealand tour last December.

Samuels is back in the West Indies set-up as they prepare to play minnows Ireland in a two-match Twenty20 International (T20I) series at Sabina Park starting Wednesday. The 33-year-old has been recuperating from a minor wrist surgery.

“The intention is to make a positive return as since the operation I have been putting in a lot of work. I have been in the nets batting and have been hitting the ball fairly well, so the hope is that everything will remain the same throughout the series,” said Samuels.

Samuels will form the core of the West Indies’ batting line-up along with opener Chris Gayle, who is also returning from injury. The big-hitting Gayle has been carrying a hamstring injury since last November and, along with Samuels, was recently passed fit to resume duties.

“It is always a joy playing in front of your home crowd and I know the guys are up and ready to compete. Ireland may not be a super power in cricket but it is T20 and given the nature of the format, it is here that they are more than likely to upset big teams. It means that we will need to buckle down and play the cricket that we know,” Samuels said.

The T20 series, which will have its final game Friday, will be followed by a lone One-Day International (ODI) at the Sabina Park on Sunday. 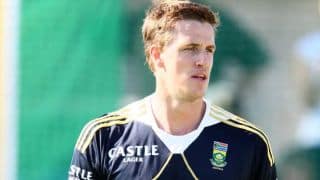