West Indies veteran batsman, Marlon Samuels scored his 26 half-century in ODIs against Zimbabwe in match 15 of the ICC Cricket World Cup 2015 at Manuka Oval in Canberra on Tuesday. His fifty came off 95 deliveries including four boundaries along with a strike-rate of 54.08. Currently, West Indies are 158 for the loss of a wicket after 32 overs with opener, Chris Gayle batting on 95 and Marlon Samuels on 53. Catch live updates of the match here 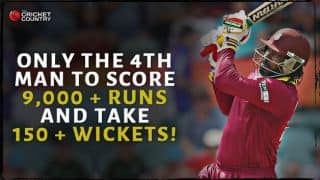