Marlon Samuels‘ sparkling ton helped the West Indies score 321 for six against India in the first One-Day International (ODI) at Kochi. It was a good comeback knock by Samuels, who has struggled with form this year. India had a rather ordinary day in the field, with Mohammed Shami‘s spell being the only bright spot.

The fans in Kochi had turned out in numbers hours before the scheduled start of play. But, some uncertainty loomed over the game. Yes, there was a threat of rain, but the pay-dispute between the West Indies players and the board but a cloud over the game as there was a word about a possible boycott. But, the West Indies team turned up on time and Dwayne Bravo was present at the toss, where they were put in to by Indian skipper MS Dhoni.

There was a change in the opening combination. With Chris Gayle missing in action and Lendl Simmons sidelined due to injury, Dwayne Bravo himself volunteered to open the batting with Dwayne Smith. To start with, both batsmen were fluent. Smith did have a tough time for a while as he tried to attack everything and missed. Bravo was getting into the groove and essayed some lovely shots through the off-side. Out of his 17 runs, 16 had come off boundaries. But, in the eighth over, he was caught behind as he went for an expansive stroke through the off-side.

Darren Bravo replaced his brother in the centre and constructed a good partnership with Smith, who found his touch with the spinners on. Ravindra Jadeja came into the attack in the 11th over and Smith smashed him over long-on in his first over. Things were going well, but after the pair had put up more than 50, Smith smashed a six down the ground off Jadeja and was bowled the next ball. Samuels walked in with pressure on his shoulders.

Darren Bravo was kept quiet for a while, but like Smith, he fell to his temptation after hitting a six. Amit Mishra was smashed down the ground in the 23rd over and then dismissed Darren Bravo as he found the man in the deep next ball. That was when Denesh Ramdin joined Samuels in the centre, with overs to spare. While one man has been in form, the other was working his way back in the side.

To start with, both were cautious and consolidated after wickets had fallen. In 30 overs, West Indies had moved to 151 for three. Mishra was brought back on and Samuels carted the first two down the ground for sixes. A few overs later, he got to his fifty with a six down the ground off Suresh Raina and in the process, he also got his 4,000 ODI runs. He had just about warmed up for a big knock.

When the powerplay came on, both batsmen found the gaps and milked runs. Ramdin was on song and played some great strokes to increase his strike-rate. In the powerplay, West Indies scored 52 and at 240 for three in 40 overs, they had set the platform for a big one. Both Samuels and Ramdin kept the scoring rate going even after the powerplay. Ramdin got his fifth ODI fifty off 51 balls, but was dismissed for 61 as they tried to shift gears.

Meanwhile, Samuels worked his way to his sixth ODI ton and it was a big moment for him considering the fact that he has been out of form this year. Along with Ramdin, he had put up 161 runs. One would say that the last ten overs were relatively quiet with Shami taking a few wickets. However, in the last over, a couple of sixes ensured they went past 320. 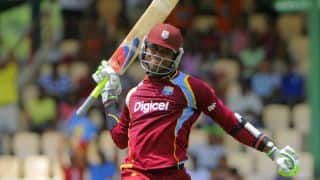