Shaun Marsh hit a gutsy 81 to steer Australia out of trouble at the start of the third and final cricket Test against Sri Lanka in Colombo on Friday. 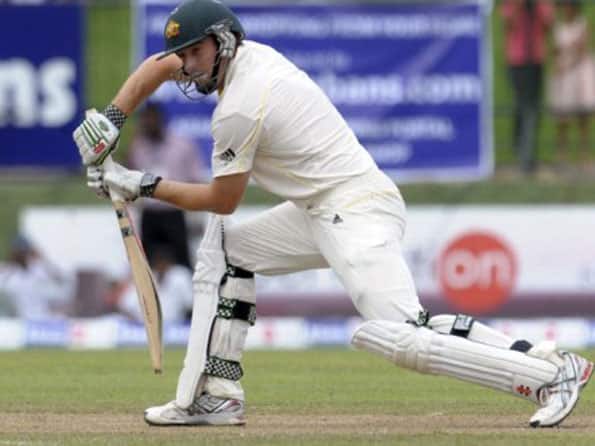 Shaun Marsh hit a gutsy 81 to steer Australia out of trouble at the start of the third and final cricket Test against Sri Lanka in Colombo on Friday.

Sri Lankan captain Tillakaratne Dilshan’s decision to send Australia in to bat on a moisture-laden wicket paid off as the tourists slumped to 22-2 in the ninth over.

Marsh, who made 141 on debut in the previous Test in Pallekele, led the revival to help Australia reach 235-5 by stumps on the opening day at the Sinhalese Sports Club.

The left-hander put on 79 for the third wicket with Ricky Ponting (48) and 70 for the fifth with Mike Hussey (63 not out) to upstage a superb debut by Sri Lankan seamer Shaminda Eranga.

Eranga grabbed a wicket with his first delivery in Test cricket — just as Australian spinner Nathan Lyon had done in the opening Test of the series — and ended the day with 2-52.

The 28-year-old Marsh missed his second consecutive century when he was bowled by left-arm spinner Rangana Herath in the final session of play.

Brad Haddin returned unbeaten on 21, having put on 45 runs so far for the sixth wicket with the ever-reliable Hussey.

Eranga, 25, one of the three changes in the Sri Lankan side, struck as soon as he replaced Chanaka Welegedara for the eighth over of the innings.

Shane Watson, who made eight, chased a ball outside the off-stump and drove straight into the safe hands of Dilshan at point.

Watson’s unexpected dismissal came after his opening partner, Phil Hughes, had fallen for a second-ball duck, bowled off the inside edge by Suranga Lakmal.

Ponting, returning to the side after missing the second Test due to the birth of his second child, survived two confident appeals for catches behind the stump before he had reached double figures.

Television replays confirmed there were no edges off the bat and Ponting grew in confidence to help Marsh take the score to 63-2 by lunch.

Ponting fell in the afternoon session when he attempted to drive a wide ball from Lakmal and only managed to edge an easy catch to wicket-keeper Prasanna Jayawardene.

The 36-year-old, the third highest run-getter in Test cricket behind the Indian duo of Sachin Tendulkar and Rahul Dravid, has now gone 22 innings without a Test century.

Ponting’s last three-figure knock was the 209 against Pakistan at Hobart in January last year.

Michael Clarke, Ponting’s successor as captain, also continued his poor run when he was caught behind off Eranga after making six.

Clarke has not hit a Test century since his 168 against New Zealand in Wellington in March last year.

They were replaced by batsman Lahiru Thirumanne, Eranga and Herath.

Australia won the first Test in Galle by 125 runs. (AFP)

Hoping that Rahul Dravid will score a hundred in his farewell ODI: Kumble