The huge gap in their International Cricket Council (ICC) rankings might make India the favourites, but former New Zealand batsman Martin Crowe feels they have a fair chance of winning the up-coming One-Day International series and Test series, if they prepare pitches that would assist seamers.

India, touring New Zealand for the first time since early 2009, have just three old faces in their ranks for the Tests —  captain Mahendra Singh Dhoni, and fast bowlers Zaheer Khan and Ishant Sharma.

“New Zealand should focus their preparation on exposing a whole line-up that has never before batted in these conditions,” said Crowe.

“Tim Southee, Trent Boult and Neil Wagner (or Adam Milne as back up) are the men to target India’s top six. They are confident, fit and work well together. Most importantly they can produce a significant amount of swing to trouble any top player early in his innings,” he added.

India, ranked number one, will play five ODIs and two Tests against the Black Caps, placed eighth, and Crowe insisted that New Zealand must play to their strength, focussing on making green tops.

“The pitches should be green and hold moisture. This environment has been missing recently. Hadlee and Co, from the glorious past, didn’t bowl on featherbeds; they gained assistance off the seam as well as through the air.

“With respect to an Indian attack that is ageing a little with Zaheer back in, local groundsmen should be watering freely, just as the ones in India remove life from their pitches,” Crowe wrote in his column in ‘Espncricinfo‘.

While India are ranked number two in Tests, New Zealand are lying at 8th position, but Crowe felt that rankings would hardly matter when the two teams contest on energetic pitches.

“India are ranked No. 2 and New Zealand No. 8, but don’t let that fool anyone. This series, if played on energetic pitches, where results are found in approximately four days, could well be as memorable as any we have seen in this part of the world for a while,” Crowe stressed.

“The home side must aim for a series win. While I am not big on unrealistic expectations, I believe that in home conditions all teams must set that goal. These days, to not win at home, whoever you are, is a missed opportunity.”

“Indian bowlers shouldn’t be discounted by any stretch.

Zaheer is one of the finest to ever open the bowling for India and his experience will be invaluable. He will know he can exploit the New Zealand openers, who are showing a distinct lack of proper foot movement at times.

“Frankly, if there isn’t better footwork shown by Peter Fulton and Hamish Rutherford, their places will become open to scrutiny — if they are not under the cosh already.”

According to Crowe, Cheteshwar Pujara and Virat Kohli against Kane Williamson and Ross Taylor, is likely to be an interesting contest.

“Both Pujara and Kohli have had remarkable run sprees recently, as has Taylor, while Williamson will be looking to kick on after getting decent starts. He has shown growth and progress in the pivotal No. 3 spot, and this tour will be a good challenge for his mental strength,” said Crowe.
Crowe felt while both will come up with good strategies, fielding could make a difference.

“The fielding unit is another vital cog, and the team that makes an impact first could well be the one that gets the jump,” said Crowe. 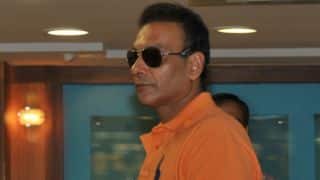