Currently, New Zealand are 13 for the loss of a wicket in one over against India in T20 World Cup 2016 at Nagpur.

New Zealand opener Martin Guptill was dismissed for mere six by off-spinner Ravichandran Ashwin, after being trapped leg-before, in the ongoing ICC World T20 2016, during Super 10 Group 2, Match 13 at the Vidarbha Cricket Association (VCA) Stadium in Nagpur on Tuesday. It was a straight ball by Ashwin, almost a good length one, as Guptill went for a sweep towards the leg side, but hit the pad, as the umpire raised the finger, while the replays showed the ball was going over the stumps. Currently, New Zealand are 13 for the loss of a wicket in one over, with opener Kane Williamson on seven, and Colin Munroe coming in. Live Cricket Scorecard: India vs New Zealand, ICC World T20 2016, Match 13 at Nagpur

India and New Zealand will battle it out in Match 13 of ICC World T20 2016 at Nagpur. This is a Group 2 match, and the first encounter of the Super-10s. India are the favourites going into the tournament, but New Zealand can take immense confidence from the fact that India have never beaten them in a Twenty20 International (T20I). India will be aware of this fact as well, and will doubtless look to remedy that. New Zealand are without Brendon McCullum though, someone who has traditionally done well against India. Live Cricket Updates: India vs New Zealand, ICC World T20 2016, Match 13 at Nagpur 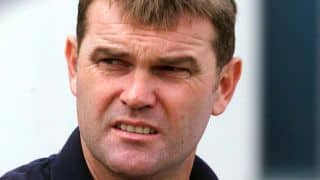