Currently, New Zealand are three for the loss of a wicket in one over, with opener Tom Latham on zero, and skipper Kane Williamson on three, vs India in 5th ODI.

New Zealand’s opening batsman in the form of Martin Guptill was dismissed for an unfortunate duck by Umesh Yadav, who bowled him up, against hosts India, in the fifth and final One-Day International (ODI), at the Dr. YS Rajasekhara Reddy ACA-VDCA Cricket Stadium in Visakhapatnam on Saturday. It was a good length ball, as it moved away in the late, while Guptill angled his bat to play it towards mid-on, as the ball crashed into the off stump off his pad. Currently, New Zealand are three for the loss of a wicket in one over, with opener Tom Latham on zero, and skipper Kane Williamson on three. FULL CRICKET SCORECARD: India vs New Zealand, 5th ODI at Visakhapatnam

A win followed by a defeat: this has been India s story so far this series (of course, it would be otherwise for New Zealand). The series is levelled 2-2. And the final match is being played at Dr. Y.S. Rajasekhara Reddy ACA-VDCA Cricket Stadium, Visakhapatnam (no, this is not the longest name you d come across). The track had no signs of grass on it. It was considered a featherbed for the batters. As a result, toss was crucial for both the teams. It was apparent that the one who calls right will opt to bat first. For that matter, fortune favoured MS Dhoni. FULL CRICKET UPDATES: India vs New Zealand, 5th ODI at Visakhapatnam 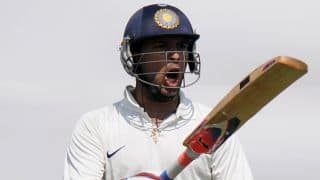