New Zealand batted smartly throughout their innings and looked primed for a truly dominating total against Sri Lanka in the fifth and final One-Day International (ODI) of the series at Mount Maunganui. However, the Sri Lankan seam bowlers held them back quite nicely in the finishing overs and New Zealand’s score has been restricted to a less threatening 294 for 5 in 50 overs. However, the pitch seems to be a bit two-paced and this is a decent score given the kind of bowling Sri Lanka produced right through the innings. Dushmantha Chameera and Nuwan Kulasekara kept it tight even New Zealand exerted pressure by forging sizable partnerships. FULL CRICKET SCORECARD: New Zealand vs Sri Lanka, 5th ODI at Mount Maunganui

Martin Guptill batted amazingly well on the surface and modified his natural game just a little to suit the demands of the pitch and improved bowling. He put away the odd lose ball with usual power but otherwise was contend to take singles. The result was a fantastic hundred of 107 balls. He got out soon after when he decided to truly push the pedal finishing with 102 of 109 balls. Kulasekara got his wicket. LIVE UPDATES: New Zeland vs Sri Lanka, 5th ODI at Mount Maunganui

Sri Lanka had a great start to the day with Nuwan Pradeep angling one across Tom Latham of a back of good length to get the edge on way to the keeper for a duck. Kane Williamson, the next man in, was sublime during the course of his innings. He was involved in a big partnership with Guptill. His dismissal was of a very poor ball. Tillakaratne Dilshan shot one down leg and Williamson went for the pull but got only his glove on it and Dinesh Chandimal took a great reflex catch behind stumps. Williamson scored 61 before falling.

The next man Ross Taylor did not look to comfortable early on but worked out the singles and partnered Guptill nicely. After Guptill’s dismissal, Taylor now better accustomed to the pace of the pitch took the baton of control. He got past of his fifty and Luke Ronchi played well at the other end.

Even then New Zealand never managed to get all the momentum going in their favour thanks to some fantastic slower ball bowling by the Sri Lankans in the death overs. Ronchi got a few boundaries but still there was not a cluster of them together. Kulasekara was the best exponent of the slower delivery to restrict the Kiwi batsmen. Finally, last over heroics from Santner took the Kiwis well past the 290-mark. Santner finished unbeaten with a 11-ball 21.

New Zealand’s final score is a respectable effort, but given how easily Sri Lanka chased 276 in the third ODI, New Zealand will not feel very comfortable about the total. That said, this pitch seems a little more difficult to bat on than it was at Nelson. 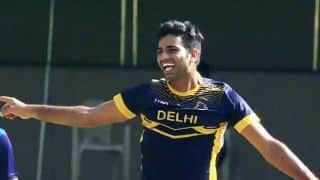