Martin Guptill hit 60 as New Zealand earned a share of the series by winning the second T20I.

Martin Guptill hit 60 as New Zealand earned a share of the series by winning the second Twenty 20 international against South Africa by 32 runs at SuperSport Park on Sunday. New Zealand made 177 for seven -– their highest total in a Twenty20 international against the Proteas -– before restricting South Africa to 145 for eight. Stand-in captain Kane Williamson, leading a side missing several key players, some injured and others resting, was delighted with what he described as “a much improved effort” following defeat by six wickets in the first match in Durban on Friday. AB de Villiers: South Africa were below par against New Zealand in 2nd T20I at Centurion

“We touched on a few areas which we needed to improve on after Durban. We wanted a few more runs in the middle overs and we managed that. We took wickets at crucial moments but we were also quite smart with our bowling,” said Williamson. South Africa were never on target in the chase after losing their first three batsmen, including world stars Hashim Amla and AB de Villiers, for 47 runs inside seven overs. New Zealand beat South Africa by 32 runs in 2nd T20I to level 2-match series at 1-1

New Zealand spinners Nathan McCullum and Ish Sodhi both took two wickets and were economical on a pitch which Williamson admitted got more difficult to bat on in the second innings. De Villiers, again captaining South Africa in the absence of an injured Faf du Plessis, said his side were well beaten. “We were definitely below par with the ball today and unfortunately we lost wickets at crucial times,” he said. Martin Guptill’s 60 boosts New Zealand against South Africa in 2nd T20I at Centurion

The sides start a three-match one-day series at the same venue on Wednesday. As in the first match, Guptill and Williamson got their side off to a fast start, putting on 52 off 5.3 overs before Williamson was caught at third man off Kagiso Rabada for 25. The pair put on 68 for the first wicket in Durban before the side subsided to 151 for eight. With Guptill making his 60 off 35 balls, New Zealand put up a better performance on Sunday but again there were no further major partnerships. Martin Guptill scores sparkling half-century as New Zealand set South Africa a target of 178 in 2nd T20I

Fast bowler Rabada took three for 30, including two wickets off successive balls in the penultimate over. But New Zealand’s bowlers struck early, with left-armer Mitchell McClenaghan having Morne van Wyk caught behind before Amla drove fast bowler Adam Milne to point. De Villiers threatened briefly, hitting 15 off nine balls with two fours and a six, before he was caught at long-on off McCullum. After that, South Africa never looked likely to win. NZC promises fans to talk with CSA to deliver broadcast for coming games of South Africa tour 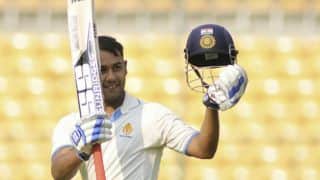 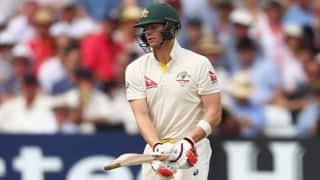