Lord's will play host to the much-anticipated match involving a galaxy of stars on July 5.

It is an eagerly anticipated contest as the greats of the game will grace the stage once again. When the Marylebone Cricket Club (MCC) will take on the Rest of the World (RoW) XI at Lord’s on July 5, 2014, the world will go down memory lane. Sachin Tendulkar will be up against Shane Warne; Brian Lara will face Muttiah Muralitharan and Adam Gilchrist will walk out to open the batting to take on the likes of Brett Lee and Shaun Tait. Adding spice to the contest are some more recent names in Virender Sehwag, Kevin Pietersen, Yuvraj Singh, Tamim Iqbal and Aaron Finch.

A look at the two teams would say that one side has a good stable batting, whereas the other has more firepower with aggressive batsmen. As far as the bowling goes, MCC has the wicket-taking bowlers, but RoW seem to have a more potent attack. There are no questions over combinations as the elevens have been named and it only has to be seen which order they come in to bat.

For MCC, Finch may open the batting with Tendulkar. Lara would be placed at No 3 with Rahul Dravid and Shivnarine Chanderpaul bringing in calm in the middle. But, if you see, they have mainly five frontline batsmen. Then, it comes to Chris Read, the wicketkeeper and Daniel Vettori, who can bat a bit. For RoW, Gilchrist should open the batting with Sehwag. Though Tamim Iqbal is there, he may be expected to bat in the middle-order.

RoW have an explosive middle-order in Pietersen, Yuvraj and Shahid Afridi to come. Paul Collingwood is one man who adds calm to this line-up as he is someone who can hold this innings.

As far as the bowling goes, MCC have genuine wicket-takers in Lee, Tait and Umar Gul. They also have a Saeed Ajmal, who comes in and will look to dazzle with his off-breaks. On the other hand, RoW will bank on the Warne-Muralitharan combination to click. Tino Best is a bit of a trump-card in this game as he has erratic tendencies. Afridi will also roll his arm over with his leg-spin. Peter Siddle will be RoW’s most crucial fast bowler.

Picking a winner isn’t an easy task as it features some old-timers who have been away from the game for a while. So, it may all boil down to how the current players perform, as they are after all still in the groove. 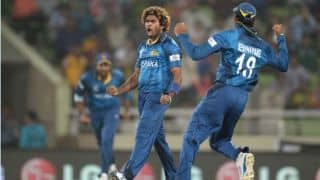 South Africa tour of Sri Lanka 2014: Chance that India will be replaced at No 2 position in rankings