Mashrafe Mortaza: We want to play an international series in India

Mashrafe Mortaza: We want to play an international series in India

Mumbai: Bangladesh made their foray into Test arena in 2000 against India but in 15 years, have never received invitation from BCCI, something that the current players are looking forward to, insists their limited overs captain Mashrafe Mortaza.

Asked about his opinion on playing in India’s backyard, Mashrafe made it clear that he wanted to play an international series in India. “Yes, definitely boys really want to play in India. We are looking forward to it. Maybe, at some stage, we will go there and play,” Mashrafe told PTI in an interview ahead of India’s upcoming tour of Bangladesh. For the record, Bangladesh have played a total of three ODIs on Indian soil only in tournaments like the Asia Cup (1990-91) and Coca-Cola triangular series (1998). Read: India’s decision to send full strength team appreciated by Mashrafe Mortaza

Bangladesh’s ICC Cricket World Cup 2015 quarter-final against India was not free of controversy with Rohit Sharma being ruled not-out off a full-toss bowled by Rubel Hossain, which was adjudged as no-ball by umpire Ian Gould. The lanky Bangladesh seamer categorically said that he has moved on from that event. “I don’t want to talk about it and want to look ahead,” he said when asked about the incident. While terming the Indian batting line-up as dangerous and no single batsman can be pinpointed, Mashrafe sounded respectful of India’s pace attack that did really well in the World Cup, save semi-final. Read: Anamul Haque confident of putting up good show against India

“India have a strong batting order. You can’t rule out anyone. There is Virat Kohli, Rohit, Shikhar Dhawan and Ajinjya Rahane is in good form. Mahendra Singh Dhoni has done well in last 6-8 years. So it’s difficult to pinpoint one of them. The bowlers, especially the quicks, have been in good form since the World Cup,” Mashrafe said with a note of caution. The senior bowler was also not bothered about DRS not being implemented due to reservations from BCCI. “I am not losing my sleep over DRS. If we can’t use, they also can’t. It’s not a big deal for us.” Read: New India Team Director to be announced before India tour of Bangladesh

Something that’s worrying Mashrafe is the impending monsoon season which could play a spoilsport. “I hope rains keep away and both can play 50 overs, but one can’t say as it’s rainy season now,” said the ODI captain, who has last played Test cricket back in 2009. The 31-year-old Mashrafe made it clear that he has no intentions of returning to Test fold right now. “Not yet, because a lot of cricket is coming up over the next few months. So right now I am thinking of ODIs and T20,” he replied, when asked whether he was eyeing a return to Test cricket. Read: Mashrafe Mortaza to retire after the one-off Test against India?

Questioned on his team’s chances, Mashrafe exuded cautious optimism. “We have some good players. Our strength is to play as a team, like we played in Australia (during World Cup) and against Pakistan. We are looking forward (to the series against India) and hopefully our boys will come out and do well,” he added. “I am expecting nothing at the moment. We want to make sure we are at the top of the mark. We are thinking about the preparations which are good. Boys are playing four-day cricket as the Test match (in Fatullah) is coming up.”

While a good outing against India post the emphatic whitewash that inflicted on Pakistan, will boost their ICC rankings, Team Bangladesh are not looking at that aspect. “We are not thinking about that (ranking) as it will bring a lot of pressure to qualify for Champions Trophy or for the 2019 World Cup. We will take one match at a time,” Mashrafe signed off. Read: Bangladesh or Pakistan: Who will qualify for ICC Champions Trophy 2017? 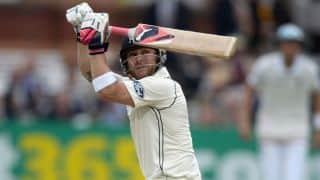 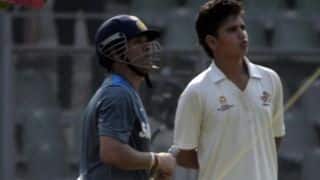 Sachin Tendulkar: Now it is about giving quality time to my family