Masters Champions League was launched in the presence of legends like Brian Lara and Adam Gilchrist.

Dubai: The registration process for individuals interested in becoming coaches and in taking up allied positions during the the Masters Champions League (MCL) cricket tournament has begun. Over three months after the tournament was launched at Dubai in the presence of legends like Adam Gilchrist and Brian Lara, the MCL unveiled the third stage of the process. Around 260 players had earlier registered themselves for auction via the official website. The registered players joined the likes of other champion cricketers, Jacques Kallis, Kumar Sangakkara and Mahela Jayawardene, in the overall tournament roster. Not just cricketers from the Test-playing world, even cricketers from Associate member countries like former United Arab Emirates (UAE) captain Khurram Khan have registered themselves for the inaugural player auction.

A similar procedure will be followed for registering coaches and support staff via the official website. Alternately, those affiliated to the Federation of International Cricketers Association (FICA) will be emailed forms for them to enroll for the positions. The positions include head coach, batting coach, bowling coach, fielding coach, physio, trainer and masseur. All the registered names for support staff will be submitted to the governing council of MCL and to the six franchise owners as a bank to pick the rightful candidates from, the MCL organisers said in a statement.

Zarah Shah, CEO, MCL said, “This is an exciting phase of the tournament because there are a number of opportunities for interested coaches to be part of this event. All the names will go into a pool for the governing council to vet and thereafter for the franchises to dip in to.” The final date for registrations is October 18. 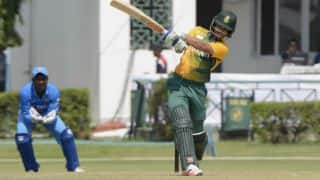