India began their tour of Australia with a narrow four-run defeat in a rain-curtailed T20I in Brisbane on Wednesday. Chasing a revised target of 174, after Australia made 158/4 in 17 overs, the India made 169/7.

Captain Virat Kohli felt that the wicket of Rishabh Pant in the penultimate over of the India’s chase was the turning point.

India seemed to be on track with Pant and Dinesh Karthik belting 51 runs in 3.5 overs before the the former was dismissed trying to play a cheeky shot off Andrew Tye.

“It was a close game, exciting one for the crowd to watch and for the players as well, was a see-saw battle. We started well with the bat, fumbled in the middle overs, in the end we thought we’ll win with Pant and Karthik but it changed again with Pant’s dismissal,” Kohli said at the post-match presentation.

Kohli lauded opener Shikhar Dhawan’s power-packed 76 off 42 balls after a prolonged lean patch that started in England and continued till the second last match of the home series against West Indies.

“He’s (Dhawan) a very strong player at the top of the order. He hasn’t got a T20 hundred yet, but the way he plays it really benefits the team. That’s how it goes in the game. What we can do is learn from them and get back better,” the skipper said.

Kohli feels closely-placed remaining two games on November 23 and 25 could be a good thing for the team as it won’t be fretting over the loss for a long time.

“On the day, if we can have three-four guys to stand up for the team, that’s what we want. Don’t have much time to think of things, which can be a good thing as well as a bad thing.” 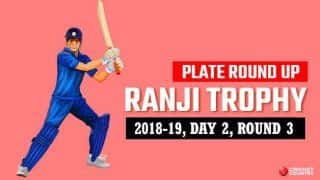