The English wicketkeeper reached the milestone when he took the catch to dismiss Ishant Sharma off Cook's delivery.

Matt Prior became the ninth wicket-keeper ever to be involved in 250th Test wickets, when he took the catch to dismiss Ishant Sharma off Cook’s delivery. Prior has taken 237 catches and affected 13 stumpings in his Test career so far. Incidentally, it was also Alastair Cook‘s first Test wicket.

The First Test match between England and India played at Trent bridge has ended in a draw. However, it was not a boring affair and we saw exciting batting performances from the likes of James Anderson, Bhuvneshwar Kumar and Mohammad Shami. 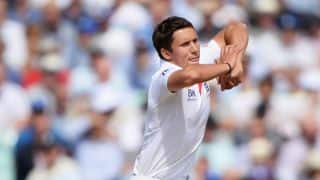