Matt Prior has insisted there is no way England will take the West Indies lightly when the teams meet for the first of a three-Test series at Lord's on Thursday. 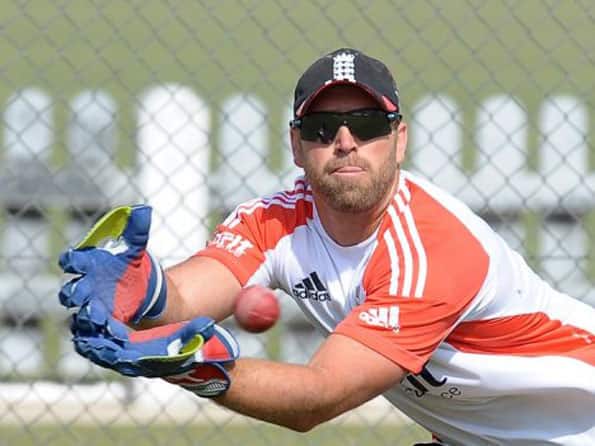 Matt Prior has insisted there is no way England will take the West Indies lightly when the teams meet for the first of a three-Test series at Lord’s on Thursday.

England are top of the International Cricket Council (ICC) Test rankings, while the West Indies — who have won just two of 30 Tests since beating England in Jamaica in 2009 — are down in seventh place.

However, the tourists do boast the world’s number one-ranked batsman in Shivnarine Chanderpaul, while England have lost four out of their last five Tests heading into Thursday’s match, after struggling against Pakistan and Sri Lanka.

“This is a very tough series in its own right,” England wicketkeeper Prior said at Lord’s on Tuesday. “I think if you get complacent or take things easy in Test cricket, or international sport in general, you get bitten pretty quickly. “There’s no room for that in our dressing room.”

Prior has happy memories of Lord’s, having scored a century on his Test debut, against the West Indies, at ‘the home of cricket’ five years ago.

“It’s fantastic to be back at Lord’s. It’s always a magical place to come,” he said. “This first series of the summer will be a tough prospect.

“We had a tricky winter. But we came out on top in Colombo, which was a fantastic effort, and we’re back in our home conditions now.

“The challenges we faced in the winter — spin on the subcontinent — are less likely here. “It was obviously a tough winter. But that win (to level the series in Sri Lanka) was crucial. To come out with that win just set us off on the right road going into the summer, and gave us a lot of confidence.

“We have learned lessons, and we are going forward. We are a good team, but we do still have some huge improvements to make.”

Prior could move back down from number six to number seven if fellow wicketkeeper Jonathan Bairstow makes his Test debut as a batsman only.

“It’s fantastic Jonny’s come in. If he gets his opportunity this week I hope he takes it,” said Prior. “As I’ve said many times before, whether I’m batting six or seven makes no odds to me as long as we get the balance of the team right and end up getting a win.”

England captain Andrew Strauss has made just one century in his last 49 Test innings but Prior has backed the Middlesex opening batsman to come good on his Lord’s home ground.

“The one fantastic thing about Straussy is that he’s just ‘Mr Consistent’,” he said. “He could score four hundreds in a row, four zeroes in a row, but he’ll be exactly the same person. (AFP)

Michael Clarke to take part in International Rally of Queensland