Close matches are decided by defining moments and Australian batsman Matthew Elliott provided one in this match.

Australia-New Zealand matches have a history of going down the wire. New Zealand always have looked to play their best cricket against their giant neighbours and prove a point. This Test in December 1997 at Hobart was no different. Having lost the first two Tests, New Zealand were playing for pride.

Close matches are decided by defining moments and Australian batsman Matthew Elliott provided one in this match. The Kiwis were set a target of 288, and they would no way play for a draw. The Stephen Fleming led outfit decided to go for the chase, and even with seven wickets down, wicketkeeper Adam Parore threatened to take the game away.

He played an uppish sweep to Shane Warne and the ball took its course towards the deep square-leg. Elliot, fielding at that position charged in, he lost his footing and was off balance but that didn’t dent his hopes. Flinging his left hand, he still attempted for it and ball stuck!
Thanks to Elliott, Australia smelled another win, but the resilience of the Kiwi tail-enders, Simon Doull and Shane O’Connor helped the hosts secure a draw. 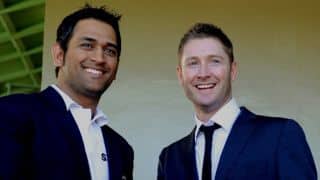 This cricketer had stars for company at night —literally!