“Developing your batting skills for the longer format is more of a cultural thing."

Afghanistan became an affiliated member of the International Cricket Council (ICC) in 2001. Last year they attained Test status along with Ireland. It has been a long journey for the terror-struck nation. They lacked proper training and infrastructure. Fighting all odds they have made it to highest form of cricket becoming the 12th Test playing nation.

In an interview with sportstar Matthew Hayden praises Afghanistan for making it to the Test level. “If you look at a country like Afghanistan, working through issues, and now playing Test cricket, it’s a massive achievement.”

However, Afghanistan faced embarrassing defeat against India  in their maiden Test as they lost by an innings and 262 runs. Talking on that Hayden wants Afghanistan to develop the mentality to play the longest format of the game.

“Developing your batting skills for the longer format is more of a cultural thing. The methods and the mind-set are passed on from one generation to another. Remember Test cricket is the absolute pinnacle and in this Test that some Afghans were playing their first First Class match. And the conditions have been challenging for Afghanistan on a surface with some grass and some seam movement,” Hayden said.

Afghanistan were heavily relied on their spin attack as they have won matches for the team in limited overs format. However, they could not do much in front of the strong Indian batting line up. Talking on that, Hayden backed Rashid Khan and even appreciated the pace bowlers. “Rashid Khan can be a real threat when conditions suit him. And the two seamers moved the ball.” 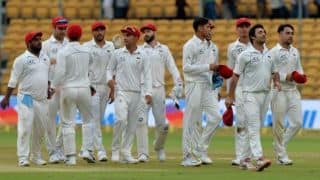