The former Australia opener suffered head and neck injuries, including a spine fracture while surfing during a holiday in Queensland.

Former Australia opener Matthew Hayden sent shock waves through the cricket fraternity on Monday when he suffered head and neck injuries, including a spine fracture while surfing during a holiday in Queensland.

Hayden, who said that he dodged a bullet after surviving the incident, will now receive treatment from the same doctor who resurrected his career after a back injury in 1996.

Have specialist appointment tomorrow, ironically from the same dude when I last broke my lower back (sweeping a cricket ball) 22 years ago. Feel a bit silly that as both then and now were just every day innocuous incidents, guess that s where the expression, sh** happens comes from, Hayden was quoted as saying in a report in the Times of India on Wednesday.

Hayden, who announced his retirement in January 2009 after playing 161 ODIs and 103 Tests, hopes to make another comeback albeit this time, not on the field. “Will let you know how things progress. In the meantime, at home I will be milking the injury for all its worth. No ironing, no hanging clothes on the line, no making beds hahahaha! I’m loving this list of not to do’s and the best part, it’s all fully condoned by professionals,” he said.

However, Hayden, who plied his trade for Indian Premier League franchise Chennai Super Kings, is adamant not to give up on surfing despite the almost fatal incident. “The pain you feel today, will be the strength you feel tomorrow,” he said. 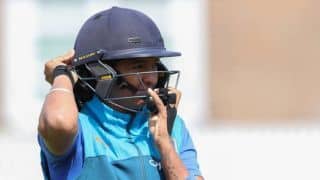