Wade insisted that he would be ready to put on Brad Haddin's World Cup gloves if required.

Australian wicketkeeper Matthew Wade has claimed that if an opportunity comes for him to play in the World Cup he would get a chance to play and is hopeful of taking his chance if that happens, despite being omitted from the 15-man World Cup squad.

Wade insisted that he would be ready to put on Brad Haddin‘s World Cup gloves if required.

While Wade thought he was close to World Cup selection, he expected Haddin to get the nod. He said that the last two or three weeks have been a bit of a nightmare for people not knowing whether they’re in or out, News.com.au reported.

The aggressive hitter with 47 ODIs to his name said that he as happy with his glove work in 2014 after briefly losing his technique.

He added that he believed he had a chance to make the 15-man World Cup squad, insisting that he was in the last one-day tournament and played all right.

Wade claimed that he got the call to say that he wasn’t in but added that he is pretty comfortable that if an opportunity comes he would get a chance to play and hopefully he will take his chance if that happens.

The wicketkeeper-batsman said that one always feels like one can play a part, and is hopeful that Haddin would be fine but insisted that if an opportunity comes he feels like he is ready to go if need be. 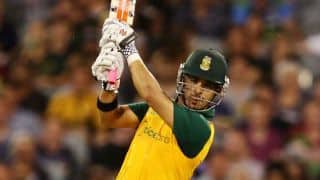 ICC World Cup 2015: JP Duminy and Quinton de Kock ahead of schedule to be fit