Chappell argues that Wade's primary role is that of a wicketkeeper and he hasn't done enough on that front to force his way back into national reckoning.

Despite belting runs across formats in Australian domestic circuit, wicketkeeper-batsman Matthew Wade has failed to find a spot in the national team which in turn has been struggling in the absence of their two premier batsmen. (ALSO READ: Last six months most difficult of my career – Finch)

With 571 runs at 63.44, Wade is the current leading run-getter in Sheffield Shield, Australia’s first-class competition. And in the ongoing Big Bash League, he’s the second highest run-scorer with 590 at 45.38.

The selectors continual snub has also left Wade frustrated but former captain Ian Chappell has backed the decision of the Tasmanian being not considered good enough for a recall. (ALSO READ: Hazlewood hopeful of getting fit for WC)

Chappell argues that Wade’s primary role is that of a wicketkeeper and he hasn’t done enough on that front to force his way back into national reckoning.

He s not a good enough wicketkeeper to be picked and that s part of the problem, Chappell said on Macquarie Sports Radio. Those who are jumping up and down saying he should be picked as a batsman haven t look at what he did in his last few Test matches as a batsman. He didn t make too many runs. I don t think you have to look any further than that.

Wade’s last of 22 Tests for Australia came in September 2017 while his last ODI was back in October 2017.

However, of late, Wade has been amassing runs with impressive consistency which also saw him being crowned as Australia’s best male domestic player this week.

Trevor Hohn, the chairman of selectors, has said that Australia already have a wicketkeeper-batsman (Tim Paine) in Test cricket who also happens to be their captain.

He had suggested the only way the 31-year-old can force his way into Australia’s playing XI is through his batting and that too if he bats up the order in Sheffield Shield.

As I suggested, it s great to see Matthew scoring some runs. But if Matthew wants to be considered as a straight out batsman, it would be nice to see him batting up a little higher for Tasmania and that conversation has been had, Hohn had said. Last six months most difficult of my career: Aaron Finch 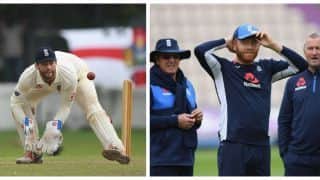