Matthew Wade's maiden test century guided Australia to a respectable first innings total of 328 all out here at lunch on the second day of the third and final Test with the West Indies. 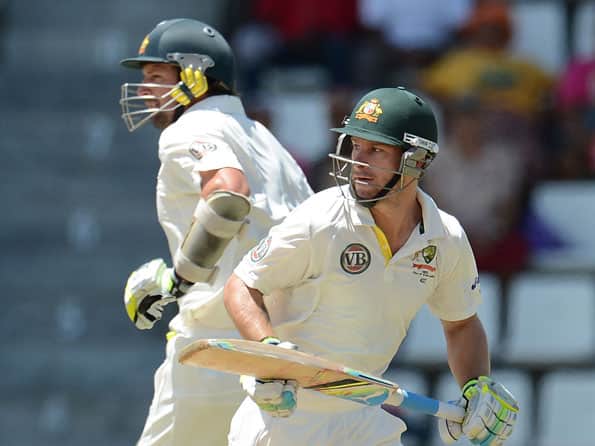 Matthew Wade’s maiden test century guided Australia to a respectable first innings total of 328 all out here at lunch on the second day of the third and final Test with the West Indies.

Wade’s innings of 106 rescued Australia from a perilous looking overnight score of 212-7 – they had been 169-7 at one point on the opening day – and gives them a great chance of avoiding defeat here and securing the result that will give them the series.

Wade finally fell to the impressive Dominican-born spinner Shane Shillingford, who went on to snaffle Ben Hilfenhaus and finish with a career best 6-119 and make it a memorable moment for being the first Dominican to play a test on his home island.

It could have been so different had not Kemar Roach dropped Wade off his own bowling in his third over of the morning when the batsman had yet to add to his overnight score of 22.

The hosts did strike next ball, though, as a sharp piece of fielding by Kraigg Brathwaite ran out Mitchell Starc for a test career best of 35. Starc was at fault as he was ambling back and carrying his bat rather than sliding it in for a third run.

Wade upped the tempo as he approached his maiden Test fifty and brought it up with a sweep shot that yielded two runs. This mark having been reached Wade went on the attack with the highlight consecutive sixes off Shillingford.

He took seven from the next over and brought up a wonderful century by driving Roach through the covers for four. It had taken 143 balls but the second fifty was struck in just 33 deliveries.

In Shillingford’s next over, Wade went for another six over mid-wicket but another brilliant bit of fielding brought his downfall.

Darren Bravo took a catch just inside the rope but realised that his momentum was taking him over the boundary. He threw the ball up, gathered himself and returned to the field of play to hold on to the ball.

Wade and Hilfenhaus had added 102 runs for the eighth wicket in just 20 overs.

The batsmen had crossed as Bravo took the catch and two balls later Hilfenhaus was bowled as he tried a slog over mid-wicket for 19.

Cricket Australia likely to have smaller board