Glenn Maxwell and Matthew Wade have had their differences, but they put everything aside to rescue Australia from a perilous position at Brisbane on Friday.

Glenn Maxwell and Matthew Wade might have had their differences earlier this season, but they put it aside to rescue Australia from a perilous position at Brisbane on Friday. Maxwell showed mettle and pushed his case as a permanent member of Australia s limited-overs team, maybe even in the Test side, with a brisk 60. Wade, who has so far struggled for runs this Australian summer, finally found form. He became the first Australian wicketkeeper in seven years to score an ODI hundred, and became the fourth overall (after Adam Gilchrist, Brad Haddin, and Tim Paine), to score a ton. He also became the second No. 7 batsman for Australia (after James Faulkner) to register an ODI hundred. Their individual contributions and an 82-run stand for the 6th wicket revived Australia, who went on to post 268 for 9 in the first ODI against Pakistan at The Gabba in Brisbane.

At one stage it looked like Pakistan had given themselves their best chance to end a miserable run in Australia, restricting the hosts with tight spells from their spinners and fast bowlers earning a lot of wickets. Mohammad Aamer accounted for heavy-scorers in David Warner and Steven Smith, that too in consecutive balls. Pakistan have remained winless for more than 12 years in ODIs against the hosts in Australia. However, if their batsmen still step up to the challenge, the winless spell can put behind them.

Warner had looked all at sea early on against Aamer, who beat his bat a few times before sneaking one through his defense. In the fifth over of Australia s innings, Aamer snuck one under Warner s bat. The ball clipped the bails on its way. A buoyant Pakistani side had more to cheer right on the next delivery, when Smith chased one angling away and got an edge through to the wicketkeeper, falling for a first-ball duck.

Chris Lynn, still into BBL mode, unleashed a few strokes to mark Australia s recovery. Travis Head trudged along. Aamer was taken off after 4 impressive overs in which he grabbed 2 for 10. Perhaps Pakistan could have continued with him for a little longer, because the change in attack did not help them.

Wahab Riaz started off with a wide over the batsman s head, and gave away 14 runs in his first over. Wahab presented Head enough width to crack three consecutive boundaries in the ninth over, which certainly took the pressure off the home side. Hasan Ali was hammered for six over mid-wicket by Lynn, who looked in ominous form during his stay in the middle.

Mohammad Hafeez, bowling in international cricket for the first time since July 2015, opened bowling with Aamer. He kept a steady line and length, and conceded 23 from his 7 overs.

Just when it started appearing that Lynn and Head would revive Australia from danger, Hasan provided the breakthrough. He bowled an excellent slower delivery outside off in the 10th over. Lynn got swayed and threw his bat wildly at it only to get a leading edge; and Mohammad Rizwan, filling in for Sarfraz Ahmed, took the catch.

Later on in the innings, Hasan showed mental prowess once again when he foxed an on-song Maxwell with another slower short ball, getting the batsman lobbing one straight towards short midwicket.

Maxwell and Wade provided Australian bowlers a competitive total to defend after their top order was blown away with Warner and Smith contributing a mere 7 runs. Maxwell was the aggressor, unleashing his reverse-sweep with efficiency. On the other hand, Wade took to nurdling the ball around as Australia had a lot of overs to cover the lost ground.

For Pakistan, Hasan was the pick among the bowlers despite Aamer knocking off two early wickets and Imad Wasim strangulating the middle-order. Imad finished with excellent figures of 10-0-35-2. Hasan claimed 3 wickets, all off slower deliveries, even though at times he seemed to have got carried away with the extra bounce on offer.

Pakistan remained ordinary in the field, allowing Australia to run four twice early on. A few tough chances could have been converted into wickets, and a better effort near boundary ropes would have surely helped them save a few runs. Pakistan’s poor fielding towards the end allowed Wade to get to his century, as he darted for a second run on the penultimate ball of the innings when there was none.

Wade got to his ton off the final ball of the innings, though not before Billy Stanlake, the lanky debutant No. 11, entertained the crowd with some hilarious batting and running between the wickets. 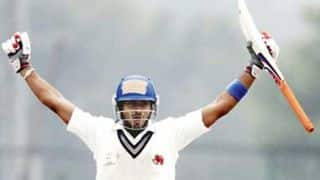 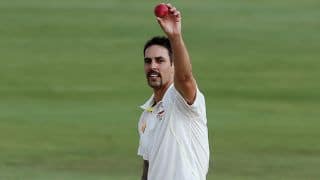