Mayank Agarwal s name was missing from India s ODI squad for the 2018 Asia Cup, but the BCCI s chief selector MSK Prasad has given hope to the Karnataka batsman by saying that he is just a step away from a maiden international call-up.

Agarwal, 27, continued his rich vein of form by scoring 236 runs in the recently concluded quadrangular tournament with 236 runs at an average of 59 for winners India B. This included 124 versus India A and 69 against Australia A in the final in his home city of Bengaluru, which followed a double-century for India A versus South Africa A during a four-day match. Before that, as part of the India A tour of England, Agarwal was his team s leading run-getter with 287 from four games as they won a tri-series with England A and West Indies A.

His batting in England earned praise from India A coach Rahul Dravid.

Asked about Agarwal s absence from India s Asia Cup squad, Prasad said that he was in line for a call-up when the BCCI selection committee sits down to pick the squad for the home series against West Indies in November.

“Mayank has been fantastic and has been performing consistently in the last the last 10-12 months time, said Prasad. He is just a step way and I’m sure in due course I’m sure he will get his recognition. He did well in all three formats in whatever opportunities he got in domestic cricket and for India A. We will definitely look at him when we rest some of those senior cricketers.

Agarwal finished the 2017-18 domestic season with a record-breaking 2,141 runs to push his case for India selection, but has been overlooked for trips to Bangladesh and England, and now the Asia Cup in the UAE from September 15-28. 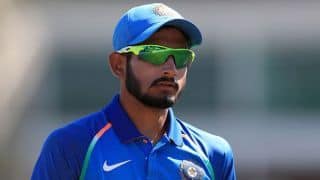