Nehra also said it would be an opportunity for Rahul - who has been dropped in the red-ball format in the past - to cement his spot in the whites for the side.

Amid all the speculations as to who will open the batting in the first Test against Australia, former India pacer Ashish Nehra feels despite Shubman Gill and Prithvi Shaw there – KL Rahul and Mayank Agarwal should open.

“There is the question surrounding India’s opening pair, as to who will open with Mayank Agarwal. I wouldn’t exactly call it a weakness, but it surely is a concern at this point. You can look at Shubman Gill, or even Prithvi Shaw for that matter, but I believe it should be KL Rahul to open the batting for India. If he can score runs given the kind of form he is in, this weakness can transform into a strength for India. I would want him to play,” Nehra said in a video on Cricbuzz.

Nehra also said it would be an opportunity for Rahul – who has been dropped in the red-ball format in the past – to cement his spot in the whites for the side.

“Mayank Agarwal had played a couple of useful innings for India during the previous tour. With him KL Rahul makes a lot of sense. He hasn’t had the best of runs for India in Tests in the last year and a half. He’s been dropped too, but it’s an opportunity for Rahul,” Nehra concluded.

India would be missing the services of Virat Kohli after the first Test as he would be returning to India to attend the birth of his first child.

The opening Test – which would be played under lights with a pink ball – will start on December 17. Babar Azam Set to Miss T20I vs New Zealand, Shadab Khan to Lead The Side 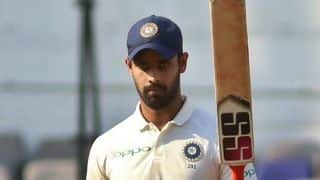