Mumbai Cricket Association was to table a meeting regarding Lodha committee report got postponed due to the indisposition of President Sharad Pawar.

Mumbai: The Mumbai Cricket Association’s scheduled meeting to discuss implications of the Justice (retd) R M Lodha committee report was postponed today due to the indisposition of MCA President Sharad Pawar. Pawar was admitted in a hospital in Pune yesterday for a kidney-related ailment and MCA sources told PTI today that the meeting has been “postponed” because of the NCP supremo’s ill health. Pawar had convened the meeting of the office-bearers to discuss the Lodha panel recommendations which have been submitted to the Supreme Court. ALSO READ: MCA accepts recommendations of Lodha Committee; Shoots down suggestions from 2

The points discussed were to be put before the managing committee members for their views, to be followed by a meeting with all the clubs affiliated to the MCA. MCA’s AGM, convened on January 22, had not discussed the Lodha panel recommendations. According to an MCA source, the association’s officials were in favour of a number of recommendations on improving cricket, but some suggestions were not practical to be implemented. The source said that during the managing committee meeting, the conflict of interest clause in the recommendations is likely to be discussed threadbare.

“The conflict of interest provision would be discussed in detail and members would be asked to disclose these through a written submission,” said the source. The source earlier  said that MCA officials were in favour of a number of recommendations suggested by the Lodha panel on improving cricket, but some suggestions were not practical. “Some of the suggestions such as One BCCI unit-One vote are not practical. We wonder what has that got to do with spot-fixing in IPL? Also the Lodha panel seems to have gone by the poor health conditions of Mr Jagmohan Dalmiya (late BCCI President) when its members met him before insisting that the cut-off age for administrators should be 70 in their recommendations,” the source noted

The BCCI has appointed an Ombudsman who will take a call once complaints are lodged to him on the vexatious issue. 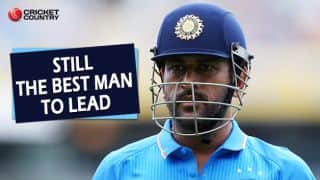