The MCA had called for Expression of Interests (EOI) from agencies for exclusive management of the T20 League for a period of five years.

Mumbai: The Mumbai Cricket Association (MCA) on Tuesday announced its very own T20 Cricket League which will be played from January 4 to 9 2018. The Association had called for Expression of Interests (EOI) from agencies for exclusive management of the T20 League for a period of five years, a media release quoted MCA chief and BJP MLA Ashish Shelar as saying. Four agencies have submitted their EOIs to the MCA. Subsequently, presentations were made by all of them before MCA’s Managing Committee. The EOIs were independently evaluated by a financial consultant with respect to the eligibility criteria. All the agencies were invited for another round of discussions with the Managing Committee, it added. Amre eager for MUM to break NSW’s First-Class title record

During the meetings, various issues like the financials, logistics, marketing, operations of the League were discussed. All the agencies were willing to conduct the league within the available time frame, as per the release. After various rounds of meetings and after evaluating the EOIs and presentations, the committee unanimously appointed the consortium of IIFL Group/Associates and Wizcraft group as the sole agency for exclusive management of the T20 League, added Shelar. 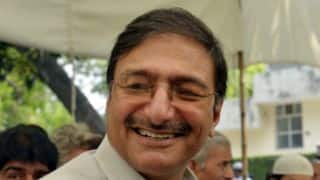