Rain came down during the sixth over of the MCC innings.

Rain has stopped play in the Marylebone Cricket Club-Rest of the World XI (RoW) contest at Lord’s. The rain came down during the sixth over of the MCC run-chase of 294. In 5,5 overs, they were 32 for no loss with Sachin Tendulkar and Aaron Finch in the middle. Finch is on 22 and Tendulkar is on 9.

Earlier, Yuvraj Singh’s 132 took RoW to 293 for seven after they had collapsed to 68 for five in 12 overs. It was a dazzling display of batting and it made the contest very interesting. RoW suffered a big blow as Shane Warne injured his hand courtesy a Brett Lee bouncer. He thus did not take the field after the break. 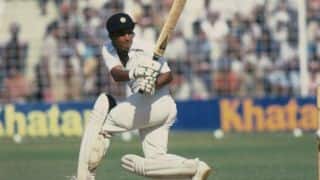