Having modelled himself after the great Glenn McGrath, Jarvis too, much like the former Australia fast bowler, likes to keep things simple and on the mark.

Fast bowler Kyle Jarvis played a vital role in Zimbabwe s historic win against Bangladesh in the first Test picking up three wickets. Jarvis and his partner Tendai Chatara shared five wickets to hurt Bangladesh and helped Zimbabwe take a first-innings lead. Bowling coach Douglas Hondo has been high on praise for the 29-year-old and Jarvis has repaid Hondo s trust with fine showing of late.

Kyle, son of former Zimbabwe cricketer, Malcolm Jarvis, is making positive strides, evident as per his last few performances. Having modelled himself after the great Glenn McGrath, Jarvis too, much like the former Australia fast bowler, likes to keep things simple and on the mark.

“Growing up, Glenn McGrath was always my hero,” Jarvis told ESPNcricinfo. “I have developed this action over the years. I have always tried to mimic and follow everything in the way he went about his game, and the lines and lengths he bowled. He was definitely an inspiration growing up.”

Jarvis started international cricket as a tearaway fast bowler but soon realised the importance of discipline, line and length. Understanding the toll fast bowling takes on the body, Jarvis is pretty measured in his approach and has found a fresh lease of life with his accuracy.

“I am not the quickest in the world. I work around the 130kph mark. You have to be pretty strong to bowl consistently over 140kph. Only a few people in the world can do that without getting injured,” Jarvis said. “Lines and lengths don’t change to good batters. Top of off is a good ball to anyone in the world. I know where their strong areas are and I will try to keep the ball away from that.

“When I was younger, I was excited at bowling quick and seeing [batsmen] jump around. I tried to bowl fast. I wasn’t that consistent. Now I am a little bit slower but a lot more controlled. I found I have had a lot more success in bowling in better areas than when I ran in and bowled as fast as I could. It is a lot more satisfying to see the batter walk off the field after you’ve got him out.”

Jarvis owes a lot to his four-season-long stint with Lancashire, one that as her his admission, helped him grow. In the last three seasons, Jarvis has picked up 149 wickets for the county side, and the results ever since he s come back into the side has are a proof of how much he s learnt. With 18 wickets in 16 matches, Jarvis may not have set the front on fire but has easily been Zimbabwe s best option with the new ball

“I learned a whole lot about my game playing four years of county cricket. I am a much better player now than I was when I left Zimbabwe cricket. I am a lot more consistent. I know my body now,” Jarvis said.

Zimbabwe lost the ODI series to Bangladesh but now have a big change of warning a rare series win as the second Test is underway at Dhaka. “Bangladesh is not renowned for being seamer friendly so I try to keep it as simple as possible. You have to bowl the width of the stumps, otherwise it becomes very easy for the batter. I was very happy with the way I went in the ODIs. I was glad to put in a few performances there,” Jarvis said. 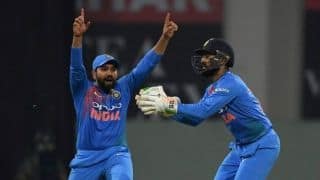 India vs West Indies 2018, 3rd T20I, LIVE Streaming: Teams, Time in IST and where to watch on TV and Online in India