Roshan Mahanama, formerly of the Elite Panel of the International Council of Cricket (ICC) Match Referees, will be the match referee for the tournament.

Dubai: The Oxigen Masters Champions League (MCL) has announced the match officials for the inaugural edition of the Oxigen MCL 2016, to be held from 28 January to 13 February. Roshan Mahanama, formerly of the Elite Panel of the International Council of Cricket (ICC) Match Referees, who recently stepped down from his position, will be the match referee for the tournament. Mahanama, former Sri Lanka One-Day International (ODI) captain, had his stint with the ICC for 12 years from 2004 to 2015. He has played in 61 Tests, 222 ODIs and 35 Twenty20 Internationals (T20Is). READ: Tino Best, Fidel Edwards, Krishmar Santokie announce international retirements;

The local umpires Sachin Solanki and Iftikhar Ali will perform duties as the fourth umpires during the tournament. Oxigen MCL CEO Zarah Shah said, “The match officials for the inaugural edition of the Oxigen MCL features a brilliant set of experienced men. We are certain to witness umpiring and refereeing of world class standards.” The first match of Oxigen MCL, between Libra Legends and Gemini Arabians, will be played on January 28 in Dubai and will see former India ODI opening partners Sourav Ganguly and Virender Sehwag facing as rival captains. Ganguly would be captaining Libra Legends which also has legendary players as Jacques Kallis and Graeme Swann.

The Gemini Arabians, led by Sehwag, also features Kumar Sanagakkara, Saqlain Mushtaq and Muttiah Muralitharan, among others. The tournament will take place at the Dubai International Cricket Stadium and Sharjah Cricket Stadium, which has previously hosted major cricket tournaments. 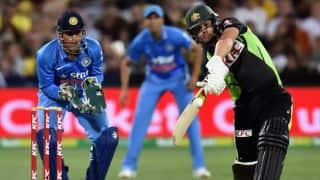