The Indian media on Tuesday lambasted their cricket team for their poor performance in England, saying Mahendra Singh Dhoni's men should never have been ranked the top Test side. 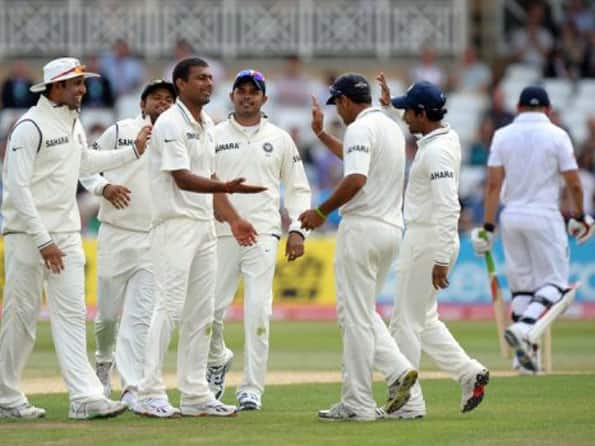 India are at the brink of losing their No. 1 Test status to England AFP

The Indian media on Tuesday lambasted their cricket team for their poor performance in England, saying Mahendra Singh Dhoni’s men should never have been ranked the top Test side.

“India don’t deserve to be number one Test side in the world,” screamed a front-page banner headline in The Times of India, echoing the sentiments of millions in the cricket-mad country.

India crashed to a humiliating 319-run defeat with a day to spare in the second Test at Trent Bridge on Monday to hand England a 2-0 lead in the four-match series.

The tourists, who lost the first Test by 196 runs, must now win at least one of the remaining two Tests and avoid defeat in the other to prevent England from replacing India at the top of the ICC’s Test Championship table.

The Times of India said Dhoni’s team became the top-ranked Test side only because of a “statistical sleight of hand.”

“Thousands of those who saw India’s craven surrender at Trent Bridge will find it hard to believe that this is really the world’s No.1 Test team,” the paper wrote. “Actually, it isn’t.”

The paper noted that even though India are unbeaten in their last 11 series — winning eight and drawing the other three — they were lucky to make it to the top.

Five of those series wins came at home and the other three were against the lowest-rung Test sides, Bangladesh, the West Indies and New Zealand, the paper said. Significantly, India could only draw against South Africa or Sri Lanka in the same period.

The Times of India said Dhoni’s men approached the crucial England series with “total lack of preparation, physically and mentally, and without the requisite hunger to remain No. 1.”

“They carried some players with niggles and injuries, and some others, like Harbhajan Singh, by virtue of past reputation. The truth is that this Indian team doesn’t seem to have a champion’s strength of character. The statistical miracle, sadly, is over.”

The Indian Express said the heavy defeats in the first two Tests had exposed the fragility of the team. “For a tired and ill-prepared team with a listless captain at the helm, the world number one tag seems at the moment to be too heavy a responsibility to shoulder,” the Express wrote.

“India have looked a jaded, disjointed side with most players showing no stomach or will for a fight.”

“Remember this day in Indian cricket. It could mark either the beginning or the end. We will know in three weeks.”