New Zealand handed a debut to 25-year-old Kyle Jamieson during the second ODI against India in Auckland on Saturday. Standing at six feet, eight inches, Jamieson is the tallest New Zealand cricketer ever to play international cricket. He is even taller than (.3 inches to be precise) that former New Zealand batsman and current batting coach Peter Fulton, affectionately known as two-meter Fulton.

Jamieson was included in New Zealand’s ODI squad with injuries to Trent Boult, Matt Henry and Lockie Ferguson. He was also part of New Zealand’s Test squad during the recent series against Australia in a bid to extract more bounce of the hard-hitting surfaces there but never got a chance in the series which ended a sorry 0-3.

Part of New Zealand’s 2014 Under-19 World Cup squad, Jamieson has been a constant feature for New Zealand A though. Since making his debut in 2018, Jamieson has scalped 15 wickets from 13 matches with a best of 4/49 against India A which won New Zealand the match in Christchurch last month when he defended seven off the final over.

Ferguson’s quality isn’t bowling express pace. He touches the mid-130s but it’s the swing he generates that remains his strength. Born in Auckland, Jamieson rose to fame picked up 6 for 7 at Eden Park, the best figures by a New Zealand bowler and the fourth-best overall in T20 cricket, during last season’s Super Smash for Canterbury. In fact, the Super Smash is a tournament Jamieson fancies – In the last two seasons, he has taken 30 wickets in 16 matches at an economy rate of 8.08.

Besides his bowling, Jamieson is also a decent batsman, with an average of 31.5 in List-A cricket. He has four half-centuries one in First-Class and three scored in List As. Jamieson even has a century playing for New Zealand XI against a touring English side in 2018 at Hamilton. Against a bowling attack comprising the likes of Stuart Broad, James Anderson and Mark Wood, Jamieson, batting at No. 8, scored a memorable 101 off 118 balls with 16 fours and two sixes before being retired hurt. 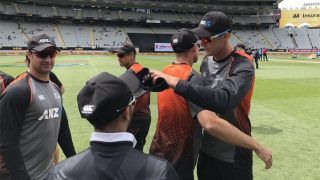