Meg Lanning expects the wickets in India to be turning tracks and said spin will play a major role in ongoing ICC World Twenty20.

Chennai: Australia women’s cricket team captain Meg Lanning expects the wickets in India to be turning tracks and said spin will play a major role in ongoing ICC World Twenty20. “Obviously spin is going play the major part in games. We have been doing a lot of work on playing spin bowling. We can adopt in the little period we have got since arriving here. We are almost used to the Chennai conditions but in all venues we have to rise our game,” Lanning said in a joint press conference with South Africa skipper Mignon du Preez and West Indies captain Stafanie Taylor on Friday.

Sputh Sfrica’s Preez said promised to give their best on the field during the mega-event. “We have had good preparation playing against England at home and won the series. We also won a series against the West Indies. These matches gave us lot of confidence. However, winning or losing depends on the day’s performance but we will give our best to win the trophy,” she said.

Agreeing that this will be their toughest-ever T20 World Cup campaign, Preez said: “Others teams winning does not impact on us. Any team can win this World Cup. We will get used to the conditions and adopt to perform well. It is fantastic for the women’s game that there are so many teams vying for the trophy.” As for women’s cricket’s development, Stafanie Taylor, the West Indies Captain,cwho was adjudged best women’s cricketer of the year in both ODI and T20 formats, said: “This is going to be the toughest World Cup of the year. Since couple of years, every team is beating the other and it has been fantastic. We expect to play some very good cricket in this World Cup. We are a strong team and have strong players and we have to just go there and prove ourselves.” 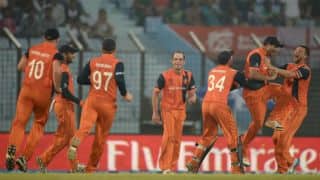 ICC World T20 2016: Netherlands knocked out after match against Oman washed out