Pietersen is on Melbourne Renegades' radar for the next edition of Big Bash League.

After Kevin Pietersen got unceremoniously sacked from the England team due to his off field misbehaviours, a host of Twenty 20 teams are queuing up to get the signature of the maverick batsmen for upcoming tournaments. First and forefront amongst them are the Melbourne Renegades who want Pietersen to play for them in the Big Bash League the following summer, whereas rival team Sidney Sixers do not seem too keen on signing the mercurial batsman.

The Renegades were previously also close on signing Pietersen for the current Big Bash League season, with the star also going on record saying that he would enjoy playing for the Melbourne outfit reported the HeraldSun.

The Renegades’ chief executive Stuart Coventry had also mentioned that team captain Aaron Finch had a good rapport with Pietersen during their playing days at the Delhi Daredevils in the Indian Premier League (IPL) and believes that he would be a ‘perfect’ signing for the club considering the current scenario.

“There’s going to be a lot of innuendo thrown around in the next 24-48 hours, but we no doubt want to be in the mix,” said Coventry about the number of clubs lining up to secure the services of Pietersen in the Big Bash League.

“I met with KP in 2012 to assess his position and when he got his English contract he became unavailable. Now that he’s unencumbered, I think he’d be a great get. He’s a proven T20 performer in all parts of the world and he likes coming to Melbourne,” added Coventry about Pietersen’s reported closeness to Melbourne.

When asked about how Pietersen will fit in with the team, Coventry replied,” He told me he likes the competition and … that his wife and child have had some really good experiences in Melbourne and that it would be a good place to live for six weeks of the Big Bash. It’s a combination of opportunity and lifestyle and what fits for him. He’d fit really well into what our key criteria with players are and he gets on really well with our captain, Aaron Finch.”

“He and Finchy played at the Delhi Daredevils together, so they’re pretty good mates,” said Coventry on Pietersen’s closeness with Finch.

When asked about whether he was concerned about Pietersen’s not so good reputation off the field, Coventry said,” Not at all. Obviously there have been some issues in the England camp in the past, but Big Bash is a totally different situation and location and I think he’d fit in really well with us. And especially having that good rapport with Finchy, we think he’d be a great asset for the Renegades.”

Though the Melbourne Renegades have gone all guns blazing in their quest to sign Pietersen, the Sidney Sixers on the contrary are shying away from signing the star batsman.

Dominio Remond, who is the general manager of the Sixers had this to say about Pietersen:” We’re definitely interested in having the best players in the game join the franchise from a playing perspective, but obviously there are a whole lot of considerations for us. We’re only allowed two overseas players within our squad and the two players we’ve got at the moment [Michael Lumb and Ravi Bopara] are performing really well, so that’s a major consideration for us. And also it’s a fit within the change room and among the playing group, so that’s something that’s very important to understand before going to the next level of investigation.”

Remond who also believes that high profile players are not a compulsion for his side also added,” I think there have been some examples of that in the Big Bash League in the first three years, where there’ve been very high profile players that have been a little destabilising within the camp, therefore we’re very wary of that.”

Though the Sydney Thunders are the third team in the fray in the quest to sign Pietersen, their general manager, Nick Cummins said that he would discuss the issue with head coach Chandika Hathurusinghe on whether the team should really sign the England star.

For the record the Thunders also have their eye on recently retired South African player Jacques Kallis and it would be interesting to see whether the club goes for the mercurial Pietersen or the intense Kallis in their chase for a genuine all-round player. 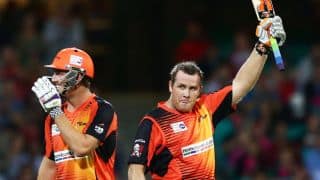