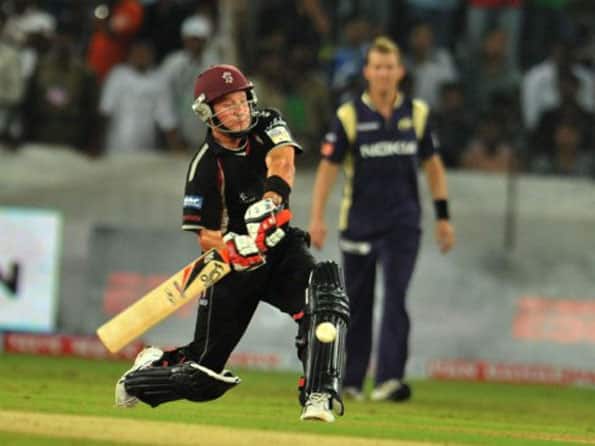 It was Somerset’s second consecutive win over Kolkata as they had beaten them in the qualifying stage as well.

Electing to bat, Kolkata scored a very competitive 161 for three on a tough pitch, thanks to a consistent Jacques Kallis and a marauding Yusuf Pathan, who sent the Somerset bowlers on a leather-hunt during the last six overs.

Kallis batted through the innings for his unbeaten 74 and Pathan hit a 21-ball 39 as the duo shared 90 runs for the unconquered fourth wicket.

The British team responded with tremendous power-hitting through Merwe and chased down the target with two balls to spare at Rajiv Gandhi International stadium.

As Merwe came out firing on all cylinders, Somerset were comfortably placed at 119 for one in 13 overs but they made it trifle difficult for themselves by losing three quick wickets before sealing the win.

Merwe’s powerful knock was adorned with nine fours and two sixes and he shared 115-run stand with Peter Trego (28).

Somerset had lost the opener Chris Jones (6) to first ball of Iqbal Abdulla’s spell but they still raced to 50 inside fifth over with Merwe scoring the bulk of the runs.

South African Merwe took the Kolkata attack by the scruff of its neck and was hitting all the bowlers cleanly and effortlessly. Such sweet was his timing that even his reverse sweep off Shakib Al Hasan sailed over the boundary easily.

Somerset collected 63 runs in the first six overs, laying the platform for an easy victory.

Other opener Trego made his presence felt when he smashed L Balaji for a four over point while Merwe raised his fifty by yet again reverse sweeping Abdulla for a four.

Merwe was hitting anything and everything thrown at him with consummate ease. A wristy six off Kallis over mid-wicket was a treat to watch.

The Protea enjoyed a bit of luck too as a couple of his lofty shots fell short of fielders.

The match was slipping out of Kolkata’s hands fast but things changed dramatically when Somerset lost three batsmen, including Merwe, in a space of six balls.

Both Trego and Merwe got out in Hasan’s last over with former being run out and latter offering a simple caught and bowled chance. James Hilderth was out for a duck, caught behind off Rajat Bhatia in next over.

Now Somerset needed 32 runs from the last five overs with new batsmen Arul Suppiah and Nick Compton at the crease.

Bhatia struck again as he bowled Suppiah (15) off his legs.

Compton (19 not out) held his nerves and guided the side to home with only four required off final over.

Earlier, Kallis brilliantly mixed caution with aggression but it was Pathan’s four consecutive sixes in the 15th over bowled by part-timer Arul Suppiah that turned the tables.

KKR smashed 30 runs of that particular over, which was launchpad for a competitive score. Those were most runs scored by a team in a single over in Champions League.

Kolkata scored only 62 runs in the first half but came back strongly to score 99 in the last 10 overs.

While Kallis hit four boundaries and equal number of sixes while Yusuf smashed 39 runs off only 21 deliveries with help of four sixes.

KKR captain Gautam Gambhir had disappointing return to competitive cricket as he perished for a first-ball duck closing face to a Lewis Gregory delivery as Alphonso Thomas at mid-off took an easy catch.

At the start, KKR opener Manvinder Bisla (17) started off in style with couple of boundaries one over cover and the other over point off rival captain Thomas’ bowling.

In the next over, he lifted Murali Kartik for a six over extra cover but perished when Gregory dug one short. Manoj Tiwary (20) wasn’t exactly comfortable during his stay at the crease but added 50 runs with Kallis as KKR scored at a rate of six runs per over.

Things changed once Yusuf joined Kallis. Lewis Gregory had the best figures of two for nine but it was baffling that he didn’t bowl his full quota. (PTI)

Another promotional event for Akhtar's biography launch called off