In a most dramatic contest, comprising two Super Over deciders, Kings XI Punjab held their nerve to eke out a heart-stopping win over Mumbai Indians on Sunday.

MI vs KXIP 2020, Live Cricket Score IPL 2020: Kings XI Punjab showed nerves of steel as they defeated defending champions Mumbai Indians in an edge-of-the-seat match that was decided via a second Super Over for the first time in the history of the Indian Premier League on Sunday. Kieron Pollard helped MI score 11 for one in the second Super Over bowled by Chris Jordan after both the teams ended at the same score in the regulation 20 overs as well as in the first Super Over. Chris Gayle then hit the first ball bowled by Trent Boult for a six before Mayank Agarwal cracked successive fours as KXIP notched up an incredible win to keep their IPL play-off hopes alive. MATCH HIGHLIGHTS

This was after Jasprit Bumrah dismissed Nicholas Pooran and KL Rahul in the first Super Over to leave MI with a six-run target. However, Mohammed Shami bowled an equally incredible over as KXIP defended the five runs to take the match to a second Super Over. SCORECARD

Earlier, Rahul smashed a scintillating 51-ball 77 to take KXIP on the brink of a successful chase but team-mates Deepak Hooda and Jordan could only level the scores at 176 for six in the stipulated 20 overs.

Bumrah (3/24) snared three crucial wickets during the regulation 20 overs after opener Quinton de Kock (53 off 43) hit his fourth half-century of the season to restrict KXIP.

He, alongwith Gayle (24), took KXIP to 75 for one in nine overs after losing Mayank Agarwal (11) early in the innings.

However, Gayle was sent packing by Rahul Chahar in the 10th over and then Bumrah returned to dismiss Nicholas Pooran (24 off 11) to leave Punjab at 108 for 3.

Rahul then pulled Chahar for a six to bring up yet another fifty but the leg-spinner made a good comeback one ball later, removing Glenn Maxwell at the other end as KXIP slipped to 115 for four in 14th over.

Earlier, de Kock hit three fours and as many sixes for his fourth fifty of the tournament to anchor the innings before Pollard and Coulter-Nile lifted MI past the 170-run mark.

The pace duo of Arshdeep Singh (2/35) and Mohammed Shami (2/30) provided the early breakthroughs, dismissing Rohit Sharma (9) and Suryakumar Yadav (0) respectively to reduce MI to 24 for two in 3.3 overs.

Ishan Kishan then became Arshdeep’s second victim when he was caught at deep third man as MI ended the powerplay at 43 for 3.

Promoted up the order, Krunal deposited Chris Jordon’s third ball over deep extra cover and then picked up a four off Glenn Maxwell in the next over.

With the spin duo of M Ashwin and Ravi Bishnoi bowling in tandem, MI picked up the odd boundaries but couldn’t completely free their arms to play the shots. 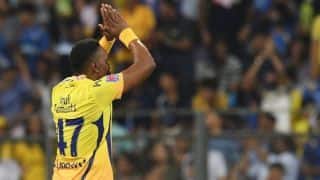 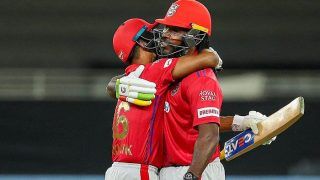