Sri Lanka's Lasith Malinga grabbed 4 for 23, including three in his last over.

Mumbai: Mumbai Indians (MI) skipper Rohit Sharma was effusive in his praise for his bowlers, who defended a modest 157 against Sunrisers Hyderabad (SRH) in an IPL cricket game in Mumbai today.

“It was a brilliant bowling performance as defending 157 was not easy. The bowlers executed the plans superbly and as a captain it was easy for me. This performance will be a great confidence booster for the matches coming ahead,” said Rohit. IPL 2015 schedule: IPL 8 match time table with venue details

Sri Lanka‘s Lasith Malinga grabbed 4 for 23, including three in his last over, while New Zealander Mitchell McClenaghan was equally impressive with figures of 3 for 20.

“I am very satisfied with our performance. Both Malinga and Mitchell bowled very well and according to a plan. We knew we had to get rid of their top two batsmen (Dhawan and skipper David Warner) as quickly as possible as they are their main batsmen,” said Sharma.

Sharma said he had mentioned earlier too that Malinga, who was off colour a bit in earlier games, was just one game away from rediscovering his wonted form. READ: Mumbai Indians vs Sunrisers Hyderabad, IPL 2015 Match 23: Highlights

“I had said this earlier too that Malinga is just one game away. He has done it again and again for MI in the past. He keeps it simple, bowls Yorkers and I had a lot of hope even when he was not bowling well. Today was a perfect platform for him to get into form,” said the MI skipper.

The victory was only the second for MI in seven games and has boosted the team’s confidence, said Sharma.

“This win will also help us stay in the hunt for a play-off spot. After seven games we know exactly what needs to be done. We have four-five days before our next game and we will figure out what is to be done. We could have batted better after getting a good start and scored more but I won?t say batting is a concern,” he said. 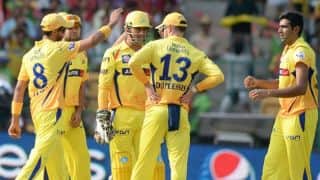 KXIP stutter in run-chase against CSK in IPL 2015