MI slumped losing three wickets in the middle overs as MI went on to post 119/4 in 15.5 overs,

Quinton de Kock and Suryakumar Yadav drove Mumbai Indians’ innings forward after they lost their skipper Rohit Sharma in the powerplay overs with a stand of 54 runs in 38 balls for the second wicket, but MI slumped losing three wickets in the middle overs as MI went on to post 119/4 in 15.5 overs, when the second strategic time-out was taken against Sunrisers Hyderabad in Match 51 of IPL 2019 on Thursday.

De Kock struggled to find his freely flowing nature of batting, but managed to keep the scorecard ticking and helped himself to the odd odd boundary even as Mohammad Nabi, Basil Thampi and Rashid Khan put in a tidy spell in the middle over, giving away nothing.

Suryakumar was in good nick starting off with two fours and then added a six and four of Nabi to score 23 off 17 balls, but perished in the 12th over, trying to hit Khaleel Ahmed deep cover only to find the  secure hands of Rashid Khan. LIVE BLOG: MI vs SRH

Evin Lewis succumbed to the guile of Nabi, holing out at deep midwicket by  Vijay Shankar for just one run. However, de Kock continued to fight his way through, while Pandya in the middle starting off with a powerful pick up shot off Thampi to get a six. De Kock then earned a four in the same Thampi over – 14th of the innings – to get some kind of momentum going. LIVE SCORE: MI vs SRH

But Some terrific fielding in the deep by SRH fielders denied Pandya at last three fours and the frustration was evident when Pandya overhit a Bhuvneshwar Kumar bouncer, only to be caught at mid-off by Nabi. De Kock was unbeaten on 47 off 45 balls.

Rohit Sharma and de Kock were off to solid start after MI opted to bat first, helping their team to 44/1 in the Powerplay overs; but the MI captain was caught at mid-on for 24 off the bowling off Khaleel in the sixth over.

Rohit started off with two fours in the first over bowled by Bhuvneshwar Kumar with Basil Thampi, playing his first this season in place of Sandeep Sharma, misfielding to allow Rohit his first four. Khaleel Ahmed was tonked for three fours in the over by Rohit before Mohammad Nabi sent down a tidy third over,giving away just four runs.

With de Kock got going taking Bhuvneshwar for two fours. With MI off a to flyer, SRH skipper Kane Williamson was forced to bring in Rashid Khan early and he gave away just one run in his first over.

In the final over of the powerplay, Khaleel got the big wicket of Rohit when the opener spliced one to mid-on fielder Mohammad Nabi. Suryakumar Yadav got hismelf two boundaries to end the Powerplay overs.

Rohit won the toss and elected to bat first. Martin Guptill comes in for David Warner and Basil Thampi gets his first game of the season in place of Sandeep Sharma while MI are unchanged. 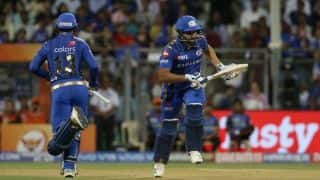 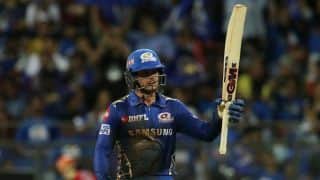