MI vs SRH: Mumbai Indians qualify for playoffs with Super Over win over Sunrisers Hyderabad

MI vs SRH: Mumbai Indians qualify for playoffs with Super Over win over Sunrisers Hyderabad

Mumbai Indians became the third team in IPL 2019 to qualify for the playoffs this season after Chennai Super Kings and Delhi Capitals, by beating Sunrisers Hyderabad in the one-over eliminator in Match 51 at the Wankhede Stadium, Mumbai on Thursday, after the teams were tied at 162 in regulation time.

Mumbai Indians became the third team in IPL 2019 to qualify for the playoffs this season after Chennai Super Kings and Delhi Capitals, by beating Sunrisers Hyderabad in the Super Over in Match 51 at the Wankhede Stadium, Mumbai on Thursday, after the teams were tied at 162 in regulation time.

After Manish Pandey and Mohammad Nabi took 16 runs off Hardik Pandya‘s final over, with Pandey hitting a six off the last ball to take SRH to 162/6 in reply to Mumbai Indians’ total of 162/5, Jasprit Bumrah put his hands up in the one-over eliminator conceding just eight runs and knocking over Nabi. Krunal Pandya added a crucial run out of Pandey off the first ball and then Hardik hit a six off Rashid Khan’s first ball to set up the game for the hosts.HIGHLIGHTS: MI vs SRH

Earlier, after Quinton de Kock‘s fighting 69 not out pushed MI to 162/5 against a disciplined SRH bowling attack, Mumbai bowlers returned the favour in kind with Krunal and Bumrah claiming two wickets each to restrict SRH. But, Pandey’s 71 off 47 balls and Nabi’s late blitz of 31 off 20 kept SRH in the game.SCORECARD: MI vs SRH

Wriddhiman Saha and Martin Guptill had SRH off to flyer in chase of the target, but MI came back well with Bumrah removing both the openers inside the powerplay overs, after which SRH were 59/2.

Pandey was left fighting a lone battle as SRH lost way in the middle overs. Thry lost the big wickets Kane Williamson (3), lbw to Krunal and Vijay Shankar (12), caught in the deep by Kieron Pollard off Krunal in a span of 8.1 overs in which only 41 runs came.

Pandey, who had started well in the Powerplay overs sustained his momentum to score his third fifty in four matches, but lack support from the other end. The introduction of Rahul Chahar and Krunal curtailed SRH’s run flow as Chahar’s four was taken for just 21 runs while Krunal’s four yielded two wickets at the cost of 22 runs.

Shankar consumed 17 balls for his 12 runs before trying to break the shackles, only to find Pollard at long-on. Hardik added the wicket of young Abhishek Sharma for two, caught by de Kock.

Pandey finally got the support he needed with Nabi coming out to bat and he got some crucial hits to the ropes to worry the MI camp. With 41 needed of 18 balls, Nabi hit Malinga for a four and six before Bumrah’s final over was taken for 12 runs, which included two fours.

With 17 required off the final over, Hardik gave away 16 with Nabi hitting a six and Pandey adding another in the final ball.

This after skipper Rohit Sharma and Suryakumar Yadav failed to convert their starts. 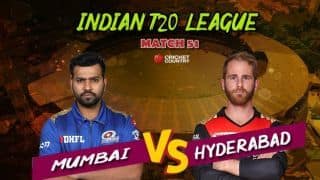 MI vs SRH: Mumbai Indians beat Sunrisers Hyderabad in Super Over, seal a place in playoffs