Coach Dav Whatmore has brought about a positive change in the attitude of the country's cricketers, said Pakistan captain Misbah-ul-Haq.

Coach Dav Whatmore has brought about a positive change in the attitude of the country’s cricketers, said Pakistan captain Misbah-ul-Haq.

“I think Dav (Whatmore) has done well with us and he has brought about a change in our attitude. The most positive thing about him is that he always backs the captain and players,” Misbah said in an interview after returning victorious in the ODI series from India.

The senior batsman, who captains Pakistan in ODIs and Test cricket, felt that a coach should be judged by his performance and not by nationality.

“A coach must be judged by his work professionally as the onus is on him to improve the team’s performance, get results and groom players. It really doesn’t matter which country he belongs too as long as the team benefits from him,” Misbah said.

Whatmore, a former Australian Test cricketer, will complete his first year with the Pakistan team in March and critics have already started questioning his role in the team.

A disappointing tour of Sri Lanka followed where Pakistan lost the ODI and Test series followed by an ODI series loss to Australia in the UAE.

Under Mohammad Hafeez‘s leadership, Pakistan won the Twenty20 series over Australia and then reached the semi-finals of the ICC World Twenty20 ahead of the short tour to India.

Misbah also said that the tour to India had been a big learning experience for the team specially the youngsters.

“Playing in India is all about handling the pressure and I think we did very well as a unit with the support staff also working well with the players. I thought Whatmore did well although it is the first time he was involved in a bilateral Indo-Pak series,” he added. 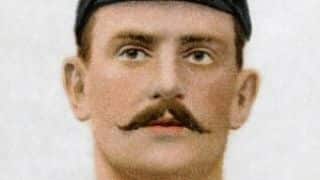 Charles Kortright: One of the fastest bowlers of all time