Australia skipper Michael Clarke said on Wednesday that Shane Watson can again take up the role of vice-captain and was free to return to the side for the fourth Test against India starting March 22 in New Delhi. 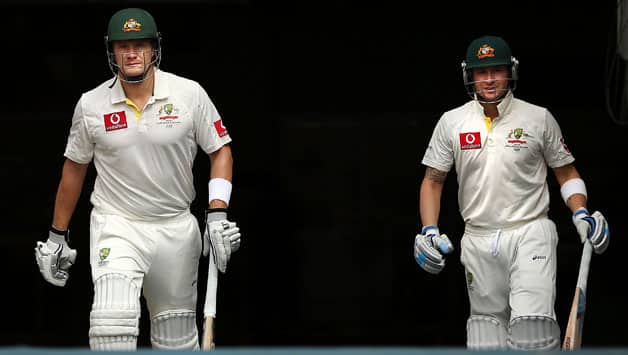 Australia skipper Michael Clarke said on Wednesday that Shane Watson can again take up the role of vice-captain and was free to return to the side for the fourth Test against India starting March 22 in New Delhi.

Watson rushed back home to Sydney to be with his wife for the birth of their first child. But Watson has also made his displeasure public after he and three others were given a one-match suspension for disciplinary reasons.

Watson termed the suspension as ‘harsh’ and said he was shattered. He is also contemplating retirement from Test cricket.

But Clarke made it ampy clear that Watson went back home just to be with his pregnant wife.

“Watto has made it clear to everybody that that’s something he’s thinking about while he’s home. He’s vice-captain of this team and he’s a big part of this team,” Clarke told reporters here.

“From the conversation Watto and I have had, 100 per cent he has gone home for the birth of his first child, which is very exciting for him. (Wife) Lee has the baby in the next few days and Watto is back here playing the fourth Test as our vice-captain.”

“That’s the best-case scenario from my point of view and from the team’s point of view. The rest is really up to Shane,” Clarke said.

Asked if Cricket Australia’s high-performance chief Pat Howard was right in questioning Watson’s team ethic, Clarke said: “I don’t think it’s fair to Watto and I don’t think it’s fair to Pat that I get involved in that. Watto has been around for a long time. Pat has been around sport for a very long time. I know those two will be in communication.”

Watson also hit back at Howard saying the former rugby international hadn’t been involved in cricket for long and didn’t know him well.

Clarke said his focus is now on the team doing well in the remaining two Tests.

“For me the focus is this team and trying to have success in these two Test matches,” he said.