At the end of Day Three of the second Test, South Africa lead by 369 runs.

Australian captain Michael Clarke admitted his side had “some work to do” after South Africa moved into a strong position on the third day of the second Test at St George’s Park on Saturday.

Australia were bowled out for 246 in their first innings, giving South Africa a lead of 177, which they stretched to 369 by the close of play, reaching 192 for four. Hashim Amla returned to form with a sparkling innings of 93 not out.

But South Africa will be without left-arm fast-medium bowler Wayne Parnell when they attempt to bowl out Australia a second time.

Parnell, who on Friday took two wickets with his first three deliveries of the match, pulled up with a groin strain after bowling three balls in his ninth over.

That left South Africa with three specialist bowlers after bringing in a batsman for an all-rounder after losing the first Test in Centurion by 281 runs.

Australia found themselves in unfamiliar territory in a dominant southern hemisphere summer, during which they have won six successive Tests, all by wide margins.

South Africa, though, looked more like the team that has surged to the top of the international Test rankings as they followed up a solid first innings with aggressive bowling to put Australia under pressure.

“Give credit where it is due,” said Clarke. “South Africa bowled very well. Four hundred runs on the board obviously helps when you’ve got a period of 24 or 25 overs to bowl (at the end of the second day).

“As a bowler you can certainly have a crack and give it everything you’ve got. Our top order probably didn’t perform as we would have liked, so it was always an uphill battle today for the rest of our batters.” Australia were 112 for four overnight.

Clarke said poor shot selection, including his own dismissal, had accelerated his team’s downfall.

“We’ve got some work to do in the second innings, that’s for sure. The wicket is deteriorating a little bit and the odd ball is keeping low. We’re going to have to make sure we’re switched on and bat well, no matter how many we are chasing.”

The tall Morne Morkel was particularly hostile, peppering the batsmen with numerous short deliveries as he took three wickets for 63 runs. Vernon Philander claimed three for 68.

“Last night we had a nice little window just before close of play to run in,” said Morkel. “My rhythm felt good last night and this morning.”

Morkel admitted the loss of Parnell was a big blow. “Wayne knows conditions here very well. The way he started in his first spell was fantastic and he’s also a guy who swings the ball.

“It’s going to put a bit of extra workload on us in the second innings. There’s a Test match to be won. If we have to put in a little extra effort I’m sure the bowling unit will do that.”

South Africa were on top from the fifth over of the day when Philander had top-scorer David Warner caught at slip for 70. Nightwatchman Nathan Lyon, after standing up to a bumper barrage from Morkel, chopped a ball from the tall fast bowler into his stumps in the next over.

Steven Smith and Brad Haddin both survived chances as they added 40 for the seventh wicket before the Australian wicketkeeper was bowled by Dale Steyn.

Mitchell Johnson hit a quick 27 before he was bowled in the over before lunch by off-spinner JP Duminy. In the previous over Johnson had been struck a heavy blow on the batting helmet by a bouncer from Morkel.

Smith made 49 before he was given out caught behind off a faint edge from Morkel after a review by South Africa.

Australia struck back at the start of South Africa’s second innings by dismissing both opening batsmen cheaply.

Captain Graeme Smith failed for the fourth successive innings when he was bowled off an inside edge for 14 by Johnson — the eighth time he has been out to the left-arm fast bowler in Tests.

The opening partnership of 20 with Dean Elgar was the highest by either side in seven innings of a series which features two strong fast bowling attacks.

Elgar was caught behind off Peter Siddle for 16.

Amla, who suffered a dislocated left ring finger in dropping a difficult chance from Haddin at gully off Philander, struck the ball with superb timing as he made his first Test half-century in eight innings off 53 balls. He and Faf du Plessis steadied the innings with a third wicket stand of 70.

AB de Villiers helped Amla add 55 for the fourth wicket. By the close Amla had faced 126 balls and hit 12 fours. 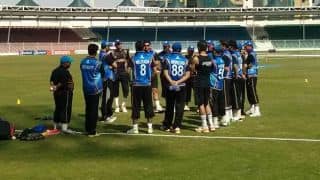 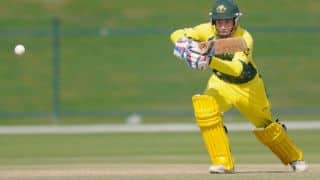