Australia skipper Michael Clarke on Monday said that age will not be barrier for being selected in for the Test team after Michael Hussey announced his retirement mid-way through the Test series against Sri Lanka. 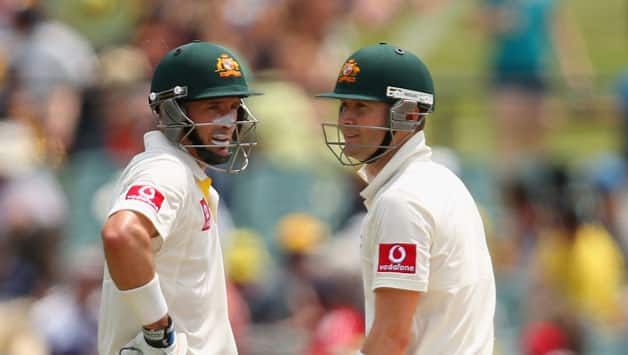 Following Michael Hussey (left) shock retirement, Michael Clarke said whether a player is 17 years of age or 37 years of age it shouldn t make any difference, to be selected in the side © Getty Images

Australia skipper Michael Clarke on Monday said that age will not be barrier for being selected in for the Test team after Michael Hussey announced his retirement mid-way through the Test series against Sri Lanka.

“I’ve said for a long time that the number or the age is exactly that, it’s just a number,” Clarke was quoted as saying by Fox Sports video.

Selectors are finding it hard to get a replacement for Hussey for the upcoming tour of India, following which Australia plays the Ashes against England.

Even though Australia has been lately emphasising on forming a fresh and young team, the retirements of experienced players like Ricky Ponting and Hussey has left a big hole on the team, feels coach Mickey Arthur.

To help the young side for the upcoming tours, the selectors are considering of calling Brad Haddin and David Hussey to provide support to the young team.

This will be a major opportunity for the young Hussey to prove his worth and cement his place in th team ahead of India tour.

“I desperately want to play Test cricket and I haven’t had the opportunity,” Hussey was quoted as saying by the Cricket Australia official website.

“I don’t think I’d be able to replace Mike as a player (but) I think it’d be a privilege to play Test cricket in his position. If that happens it would be fantastic.”

When David was asked whether his age will cause any hindrance, he joked, “I’m 29, what are you talking about?”

He further added, “I guess my advantage is I’ve played for a long time. I know my game pretty well. I’ve made a lot of first-class runs.”

“Allegedly I’m a very good player of spin, so I’d love to prove myself against the Indians.”

David revealed that he tried talking to Michael Hussey about not retiring, especially ahead of India series, when his experience will much needed by the side.

“Mike called me the other day, the other morning, I thought he was still drunk when he was ringing me,” Hussey said.

“I sort of tried to talk him out of it but he’s pretty content. He was very happy with his decision and I think it’s good luck to him, going out when he wants to go out and not every sportsman can try and do that,” David concluded.