Melbourne: Australia Test captain Michael Clarke expects exiled England batsman Kevin Pietersen to feature in the next Ashes series because he is a wonderful player. Pietersen was axed by the England and Wales Cricket Board (ECB) following England’s 0-5 Ashes whitewash in 2013-14, but will make his English county cricket return for Surrey this weekend in a bid to return to the national side. Kevin Pietersen slams century for Surrey against Oxford MCCU

The 34-year-old negotiated his way out of his Indian Premier League (IPL) contract to return to Surrey and scored 170 against Oxford in the county’s final warm-up game, showing glimpses of the form that propelled him to become England’s all-time leading run-scorer. Michael Clarke to lead Melbourne Stars in Big Bash League

“Yeah, I do think he could be at the Ashes,” Clarke was quoted as saying by cricket.com.au on Friday when asked whether his Ashes rival could line up for England in the July 8-August 24 series. “He’s scoring enough runs, he’s made it very clear he wants to play and now it will come down to England selectors and the England board making their decision. At the moment from the Australians’ perspective I’m happy he’s not playing because he’s a wonderful player,” Clarke said. Kevin Pietersen’s England chances boosted after Paul Downton sacking, believes Chris Tremlett

ECB chairman Colin Graves, who takes charge next month, opened the door for Pietersen, suggesting a mountain of domestic runs couldn’t be ignored. “I’ve been given a lifeline,” Pietersen said following his century against Oxford last week. “I really, really like the way that the new bosses are talking, from stuff that you read and stuff that you hear. All I’ve got to do is score runs,” Pietersen concluded. 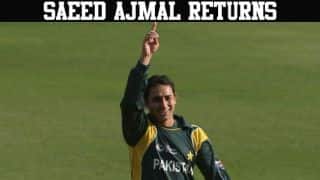