Australia were skittled out for just 60 in 18.3 overs — the shortest completed first innings in Test history.

Nottingham: Australia captain Michael Clarke insisted his team could still “save the Ashes” after a humiliating first day in the fourth Test against England at Trent Bridge on Thursday. Clarke’s men were skittled out for just 60 in 18.3 overs — the shortest completed first innings in Test history — after losing the toss in overcast but not totally ‘unplayable’ conditions. Stuart Broad took a Test best haul of 8 for 15 in 9.3 overs on his Nottinghamshire home ground as the fast-medium bowler became only the fifth England cricketer to take 300 Test wickets. By stumps, Joe Root’s unbeaten 124 — his second century of the series — had taken England to 274 for four with a lead of 214 runs. England are 2-1 up in the five-match series and need just one more victory to regain the Ashes. READ: Australia’s no-show against menacing Stuart Broad will haunt them for years

Australia will continue to hold the Ashes if they either somehow win this match and the last Test at The Oval or if the campaign ends all square at 2-2. “I’m really disappointed with how the day has turned out, but it’s only one day down,” said Clarke as Australia’s batsmen were once again undone by sideways movement of the ball. “We’ve got to find a way. I think we were mentally up for the fight, obviously it doesn’t look like we were, but I don’t want to take anything away from Stuart Broad, and England were brilliant in the field.” READ: Stuart Broad shows a rare glimpse of history in Ashes 2015 4th Test at Trent Bridge

Clarke’s wretched Ashes series continued as he fell for 10, caught at first slip by opposing captain Alastair Cook off Broad. It left him with a meagre series total of 104 runs in seven innings and meant that in his past 29 knocks at this level the 34-year-old, one of the best batsmen of his generation, had reached 25 just six times. “We tried to defend and got out and we tried to play shots and got out,” said Clarke, whose career has recently been hampered by hamstring trouble in addition to a longstanding back complaint. READ: Australia’s collapse at Trent Bridge among worst in history

“I don’t think it was the aggression that got us out — I tried to be aggressive and with that comes risk. We weren’t as good as we need to be with the ball, but it doesn’t help when you’ve only got 60 runs,” he added. “We can still find a way to save Ashes, but we’ve got to fight.” Clarke took the unusual step for a Test skipper who hasn’t enjoyed a major personal performance of fronting up to the media after the first day. “That’s as tough batting conditions as I’ve faced,” Clarke, one of the best batsmen of his generation, told reporters. READ: Australia desperately need Mitchell Starc to strike in Ashes 2015

Asked if this had been the worst day of his career, a rueful Clarke said: “It’s up there. That and being bowled out for 47 against South Africa (at Cape Town in 2011) is not a nice one to remember.” Clarke added: “The guys have worked extremely hard in the nets in conditions that have swung and seamed. Shot selection is a critical part of being a successful batsman, there’s no doubt about it. It might look like a lot of the guys could have let those balls go but the class of Stuart Broad, he was bringing the ball back into the right-hander where he normally takes it away, so that makes you feel like you have to play a lot more. “Nothing went right at all today, that’s for sure.” However Clarke, trying to remain as upbeat as possible, said: “We can still find a way to save the Ashes…There’s still a lot or time left in this Test. We’ve just got to play out of our skins.” READ: Under-fire Michael Clarke needs expert help to battle himself out of danger 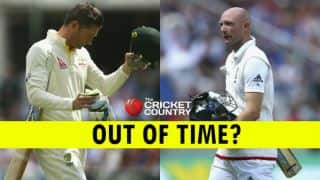