Clarke has been plagued by a longstanding back problem and more recent hamstring trouble.

By Julian Guyer, Nottingham: Australia captain Michael Clarke said Saturday he “hadn’t led from the front” as he announced he would retire from international cricket after this month’s fifth Ashes Test against England at The Oval. The 34-year-old made his announcement after England completed a crushing innings and 78 run victory over Australia in the fourth Test at Trent Bridge to take an unbeatable 3-1 lead in the five-match Ashes series. “I will have one more Test and that is the end of my career,” said Clarke during the post-match presentation ceremony. “I am retiring from international cricket. I don’t want to jump ship now so I will have one more go at The Oval,” he added after reports in Australian media earlier Saturday that he was about to end his Australia career. READ: Alastair Cook becomes first England player to be part of 50 Test wins

The fifth Test starts at The Oval, in south London, on August 20. Clarke, one of the best batsmen of his generation but plagued by a longstanding back problem and more recent hamstring trouble, is in a desperate run of form, having reached 25 just six times in his last 30 Test innings. “There’s no doubt I’ll always hold myself accountable, my performances haven’t been anywhere they need to be,” said Clarke. “I don’t blame anyone in the changing room, but I haven’t led from the front. I started this great game at six years of age and I think it’s the right time to walk away now. When I first came into the team I had 11 older brothers helping me get into a position where I can help the team and hopefully I’ve done that.” VIDEO: Michael Clarke cries while talking about his retirement from international cricket

Clarke has made 28 Test centuries, one short of Australia batting great Donald Bradman‘s tally, in his 114-match career. England captain Alastair Cook hailed his opposite number by saying: “To Michael from the England team you were a fantastic player, fantastic leader. You should be remembered as a great captain.” But Saturday’s defeat saw Clarke become the first Australian in more than a century to lose four successive Ashes series in England. Michael Clarke retires from international cricket, says it is the right time

Clarke averages just 16.71 in eight innings this Ashes, with a top score of 38 and, as a consequence, his career Test average has dropped below 50. He retired from one-day international cricket after leading Australia to World Cup glory on home soil earlier this year, with Clarke saying he had made the decision in order to prolong his Test career. READ: Michael Clarke trends no. 1 on Twitter in India

One of the few major targets left for Clarke would have been to win a Test series in England, having previously been on the losing side during Australia’s tours in 2005, 2009 and 2013. But this is one achievement that will now elude him. Clarke’s Test career began in style when he made a hundred on his debut against India in Bangalore in 2004. The New South Wales shot-maker also scored a hundred in his first Test on Australian soil, against New Zealand in 2004, making him the only Australian to score a century on both home and away debuts. “When Michael made his stunning Test debut in Bangalore back in 2004, Australian cricket knew it had found a very special talent,” said Cricket Australia chairman Wally Edwards in a statement.

Edwards also praised Clarke’s leading following the passing of his fellow Australia batsman Phillip Hughes, who died after being  hit on the head by a bouncer in a domestic match at the SCG in November. Clarke, widely lauded for a moving eulogy he gave at close friend Hughes’s funeral, then scored 128 against India in Adelaide when Australia next played a Test match — the last time he made a Test century. “His innings against India in Adelaide last [Australian] summer stands as one of the most memorable and emotional episodes in the history of Australian sport,” said Edwards. “His leadership throughout that tragic time was a mark of his character. He leaves the game as one of our all-time greats…We wish Michael well for his final Test match and thank him for his outstanding service to the game.” Heir apparent Steven Smith, seen talking to selection chief Rodney Marsh before the start of Saturday’s play, is now set to become Australia’s captain for their next Test series in Bangladesh in October. READ: Michael Clarke deserves opportunity to go out on his own terms, feels Allan Border 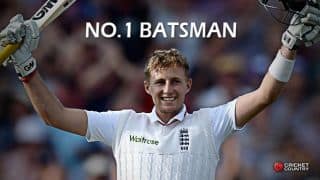 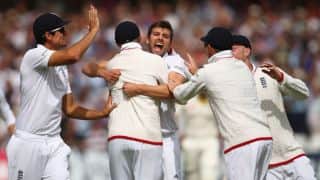