Australia skipper Michael Clarke on Tuesday blamed his bowlers and fielders for their eight-wicket loss to Sri Lanka in the second final of the triangular series at the Adelaide Oval. 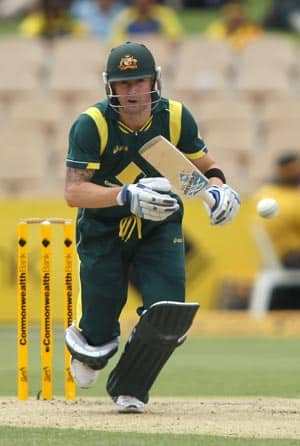 Australia skipper Michael Clarke on Tuesday blamed his bowlers and fielders for their eight-wicket loss to Sri Lanka in the second final of the triangular series at the Adelaide Oval.

Electing to bat, Australia scored 271 for six but Sri Lanka overhauled the target losing just two wickets and 4.4 overs to spare and Clarke said his side could neither utilise the bowling powerplay nor the batting powerplay.

“Our bowling was poor, our fielding let us down. On good wickets you need to maximise your Powerplay, you need to make 300 on that wicket against a strong batting side like Sri Lanka. It doesn’t help if you keep losing wickets,” Clarke said after the match.

“But we can’t complain, the boys are working hard, its just that we are not executing the plan against quality opposition. We’ve got to find a way,” he added.

Clarke, who played only his second match after recovering from a hamstring injury, said something has happened to his left hamstring.

“It doesn’t feel great, may be I pushed harder. I’ll come to know more about it tomorrow,” he said.

His Sri Lankan counterpart Mahela Jayawardene said he was disappointed with the fielding but credited the batsmen for finishing the job for them.

“It is disappointing, we were dropping catches like hot potatoes. We bowled well up front, but then gave them about 20 runs extra but we had a good start while chasing,” he said.

“Dilshan played well. He started well and took the pressure off. I hope he ends at the top of the table by the end of the series. We are proud of our game as no one gave us a chance when we came to Australia, we’ve done a lot of hard work, we just need to do the basics and execute our game plan on Thursday,” he said.

In the 44th over, Farveez Maharoof had bowled a high full toss to Clarke, which was pulled away to the square leg boundary for a four. However, the umpire adjudged it as a no-ball quite late and Mahela was unhappy.

Asked about the incident, Jayawardene said, “I have no issue about the full toss, it is just the time taken by the umpires to call it a no-ball. But everything is ok now. I think I have been fined for that outburst. If I get paid I will give the 10 per cent,” he said, jokingly.

Adjudged Man of the Match for his 119-ball 106, Tillakaratne Dilshan said he was enjoying his batting now after a bad-patch during his captaincy days.

“I’m really enjoying my batsman at the moment. I got starts but never converted them and its nice I am converting and back to my form,” he said.

“Last one month we have played good cricket. When we came here everyone thought we are not that good, but we’ve showed the world how good we are. We have the advantage going into the third finals but we still have to play well,” he said. (PTI)