Australian skipper Michael Clarke has defended the selectors' decision of making regular changes in the Test side throughout the series. 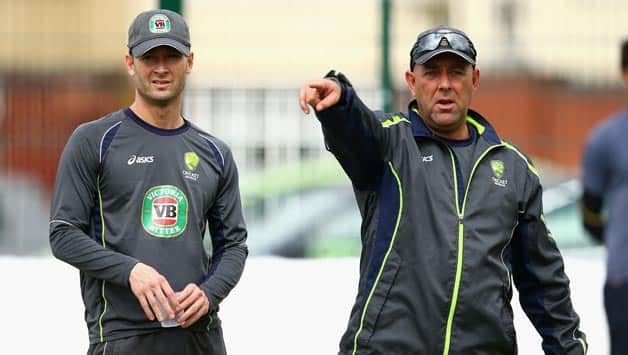 Michael Clarke (left) said if a player isn’t performing, he will get dropped © Getty Images

Australian skipper Michael Clarke has defended the selectors’ decision of making regular changes in the Test side throughout the series.

He was quoted saying by Sydney Morning Herald, “This is not a charity tour. It’s not about giving blokes a go and hoping for the best. All the selectors can do is pick what they feel is the best XI but it’s up to us as players to do our job and unfortunately our batting has let us down throughout the series so far.”

Usman Khawaja is likely to be dropped from the final Test at the Oval and pacer Mitchell Starc is likely to make a return. Khawaja has an average of 19 from the three Tests that he has played in the current series. Phil Hughes is set to replace him. However, there are suggestions of Matthew Wade might be brought in as the specialist batsman.

Clarke further said, “Unfortunately that’s what happens when you don’t make as many runs as you like. And again I know there’s been a lot of talk back home about consistency of selection but the selectors are trying to do everything in their power to help us win and if guys aren’t performing, unfortunately you can’t select them. Or if you’re not performing, you get dropped.”

“Every single one of us, every one of the batters, would like a big score. I think the last double-hundred away from Australia was scored by Jason Gillespie [in Bangladesh in 2006]. It’s a long time ago. I’m not big on stats, but I know that stat.”

Starc criticised about continuous shuffling of the side over the past five months. If he returns, Jackson Bird is likely to be dropped.

Australian selectors faced much criticism when they opted to go with Ashton Agar over side’s No 1 spinner Nathan Lyon.

The 32-year-old said that Darren Lehmann’s warning about cricketers careers at stake was not point of discussion among the players.

“I haven’t had one conversation with the players about it to be honest, so they’ve obviously reacted OK. They’ve probably accepted it. They’re realists. It’s like any sport at the highest level. If you’re not performing, there’s a chance you can get dropped. I think every single player understands that.”

Australian players trained on as usual Monday but five senior players were seen busy in discussions with coach Lehmann and selector Rod Marsh for about 30 minutes. The five cricketers were Clarke, vice-captain Brad Haddin, pacers Peter Siddle and Ryan Harris and Shane Watson.

“It was more or less about us standing up as senior players and leading from the front. It was a reminder that we continue on and off the field to lead the way. It is more important when things aren’t going to plan,” Clarke said.

Ian Bell has always been a star in our eyes: Alastair Cook